Isuzu Malaysia has revealed that the MU-X (MU stands for Multi Utility), successor to the 7-seater Isuzu MU-7 that was sold in Thailand, will be making its way here come June.

The brand’s flagship SUV made its world debut at the 2013 Tokyo Motor Show and shares the same underpinnings (ladder frame chassis) as the outgoing D-Max. It will be offered here with the sole 2.5-litre VGT diesel engine.

Fuel tank capacity is estimated to be 65 litres large, about 11 litres less than the D-Max which made the 1,809km drive from Bangkok to Singapore a successful feat. In other words, the same frugality and performance are retained, or so it seems.

The dual purpose SUV comes with hydraulic shocks and rides on independent double wishbones with coil springs and a stabiliser bar at the front. The rear however, gets a multilink suspension with coil springs instead of the D-Max’s elliptical leaf springs. Isuzu says this gives passengers better comfort without compromising the car’s off-road capabilities.

Externally, the MU-X looks strikingly similar to the D-Max, especially when viewed from the front. However, several visual cues set them apart, such as the fog lamps and lower grille. The headlamps get halogen projectors, whereas the 4×4 variant will get an extra pair of LED daytime running lights built next to the fog lamps. The side mirrors here are finished in chrome and comes with the integrated signal indicators.

Unfortunately, both the 4×2 and 4×4 variants will not come with keyless entry and push-start button. Inside, there’s a lot of the D-Max that’s been carried over, but the MU-X gets a two-tone black and silver finish. Where the 4×2 makes do with manual air conditioning, the 4×4 gets a single-zone auto air conditioning, but both variants will get second and third row air vents. The rear air-cond vents also get a separate condenser and blower speed.

Leather seats are standard in both variants, including a 6-way electric seat for the driver. The 4×4 benefits from a rear DVD monitor and a Blaupunkt touchscreen multimedia DVD player (Android OS) with mirror link, WiFi, USB, Bluetooth, GPS Navigation and reverse camera, whereas the 4×2 gets a 2-din CD player that supports Bluetooth and USB. Both variants get six speakers, though.

The safety kit includes dual front airbags, ABS with EBD, Brake Assist, Electronic Stability Control, Traction Control and Isofix mount for the second row seats. The 4×2 gets two reverse sensors at the back, while the 4×4 gets four.

We’ve just sampled the MU-X on a drive from Kuala Lumpur to Cameron Highlands and back, so for those who are on the lookout for a new, flexible 7-seater SUV, stay tuned for our report! 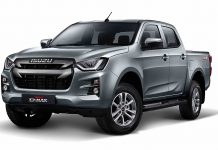