Scuderia Ferrari won at last weekend’s Grand Prix in Sepang International Circuit running on the new Shell Helix Ultra with PurePlus Technology motor oil that featured an ultra-clean base oil made from natural gas. It was a victory to savour as the last win for the Prancing Horse team dated back to the 2013 F1 season!

Guy Lovett, Shell Formula One Technology Manager, said; “The engine of the SF15-T produces in excess of 600 horsepower, and the turbocharger, which rotates at up to 2000 revs per second, can be operating at up to 1000°C. The new Shell Helix Ultra with PurePlus Technology certainly proved that it could cope with the high temperature and high stress conditions while affording the engine an unprecedented level of protection.”

Shell PurePlus Technology is a revolutionary gas-to-liquid (GTL) process, developed over 40 years of research, that converts natural gas into a crystal-clear base oil with virtually none of the impurities found in crude oil. The base oil is produced at the Pearl GTL plant in Qatar, a partnership between Shell and Qatar Petroleum, and the world’s largest source of GTL products today.

After three years of intense testing, the new Shell Helix Ultra race formulation is now used in the new Ferrari V6 engine on the F1 track.

Combining the pure base oil made from natural gas with a selection of high performing additives results in a higher quality motor oil race formulation produced by Shell for Scuderia Ferrari. It cleans and lubricates the engine, which helps to minimise frictional losses and ensure that the maximum amount of fuel energy reaches the wheels throughout the race. It also helps to deliver improved fuel economy – which has become even more important with the limitation on fuel (100kg per race) enforced by the F1 technical regulations.

Mark Wakem, F1 engine-oil development leader for Shell, says “Shell Helix Ultra for Scuderia Ferrari is designed and developed to improve the power and efficiency of the engine by reducing the losses inside it. The more you reduce the friction, the more power is left from the fuel to get out to the wheels for optimum performance.”

This oil helps Scuderia Ferrari get the most out of its F1 engines now and protects its performance in the future. It is also the only motor oil recommended by Ferrari for all of its road cars.

The on–road version of the motor oil, the new Shell Helix Ultra with PurePlus Technology, has been available in Malaysia since last year. It is a fully synthetic motor oil made from natural gas that delivers higher level of cleansing and protection than ever before.

Complete the slogan and WIN!

With the most creative slogan, you stand a chance to win: 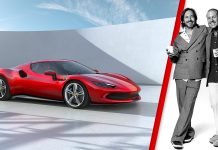