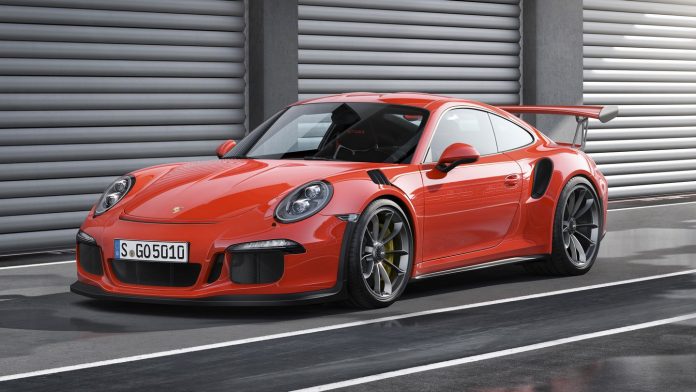 Let’s just begin by saying that no motor show is truly complete without one sports car from Porsche. Having said that, the German carmaker has just had their global premier of the most extreme road-going 911 to date, the 911 GT3 RS, at the ongoing Geneva Motor Show.

Having launched the 911 GT3 RS, this particular model sits at the very top of the 911 model range, above the 911 GT3. Before we go down to the details, Porsche proudly claims that their latest iteration of the RS blurs the line between a full blown race car and a road-legal sports car. It’s not an easy task, considering the stringent safety regulations needed for homologation. They’ve done that, so now, it’s onto the RS.

Telling the RS apart is like differentiating night and day, because as racey as other 911s go, this tops the charts with the addition of several RS-specific aerodynamic parts. At the front, the RS gets a specially designed front lip and a carbon fibre rear spoiler that puts the Subaru STI’s to shame. The roof is made of magnesium here, a Porsche’s first, and features two sleek grooves to improve aerodynamics.

The RS appeal is further reinforced by more ducts and vents found all over the body. The vents on top of the front wheels functions by adding downforce to the front axle, keeping it sucked onto the ground at all times, improving grip. To top it off, the RS sits on 20-inch wheels at the front and 21-inch at the rear.

Inside, the RS looks just like its RM1.23 mil GT3 stablemate, but features several enhancements to go with its street-legal racecar status. New here are the Alcantara clad race bucket seats made of carbon fibre, just like the 918 Spyder’s. There’s also the optional Sport Chrono Package which gives you Porsche’s Track Precision smartphone app. This app allows you to upload your driving data to your phone and measure parameters such as vehicle speed, lateral acceleration, deceleration and directional acceleration.

Also new to the centre console is the Pit Speed button. It functions by limiting the RS’ speed as you enter the pit lane – an entirely new feature that wasn’t offered in the previous GT3 RS. The guys at Porsche weren’t joking when they said this GT3 RS blurs the line between sports cars and race cars.

The maths don’t just end there, because the key to making this GT3 RS the most extreme 911 to date is weight reduction. Porsche is no stranger to motorsports. The RS benefits from the Stuttgart-based sports car maker’s breadth of motorsport expertise, and its weight saving formula begins with the aforementioned full-magnesium roof. Other large bodyparts like the engine and luggage compartment panels are made of carbon fibre. This makes the RS a good 10 kg lighter than the GT3.

The GT3 RS is open for booking now and will find its way to American soil in July this year. It carries a starting price tag of USD175,900 (about RM648,000), and judging by the 911 GT3‘s reception here, there is a possibility that the RS will complete the 911 range here. The question is, how much will it cost?