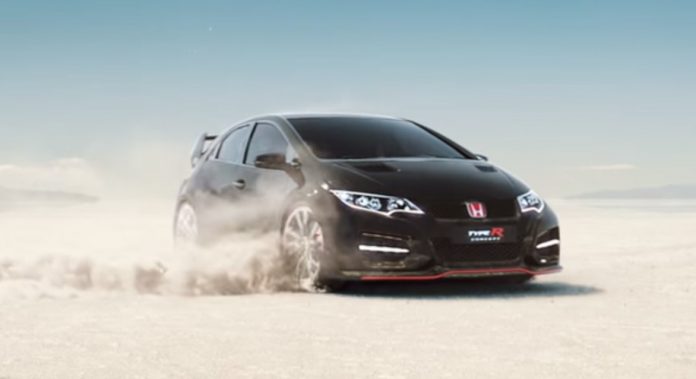 Honda last week released a short but smartly executed “Keep up” video advertisement, featuring some of their latest line of products, including the popular Jazz, HR-V, the new Civic Type R and reborn mid-engine supercar, the NSX.

The Civic Type R as we now know, features a 2.0-litre direct injected turbocharged VTEC engine that could potentially make upwards of 280 horsepower and is capable of reaching a top speed of 270 km/h, thanks to thorough aerodynamic revisions. It’ll also get a six-speed manual transmission that drives the front wheels.

This hot hatch seen in the video appears to come equipped with some fancy LEDs, with the headlights donning strip-LED, presumably daytime running lights. Main light source is very likely to be LED as well, while the conventional halogen fog lamps (refer to top image) are omitted in favour of more LED lighting, just like the Type R Concept. This may well be a trim issue, but we’ll find out for sure when the wraps are completely off.

Also teased in the video is the new mid-engined NSX. This hybrid supercar will get a twinturbo V6 engine (displacement unknown) aided by three electric motors, making for a combined output in excess of 550 hp. Transmission choice is a nine-speed dual clutch automatic, and drive system is powered by the carmaker’s advanced Sport Hybrid Super Handling All-Wheel Drive (Sport Hybrid SH-AWD).

Both these hot cars will be making their world appearances at the 85th Geneva Motor Show, set to take place from 5 to 15 March.