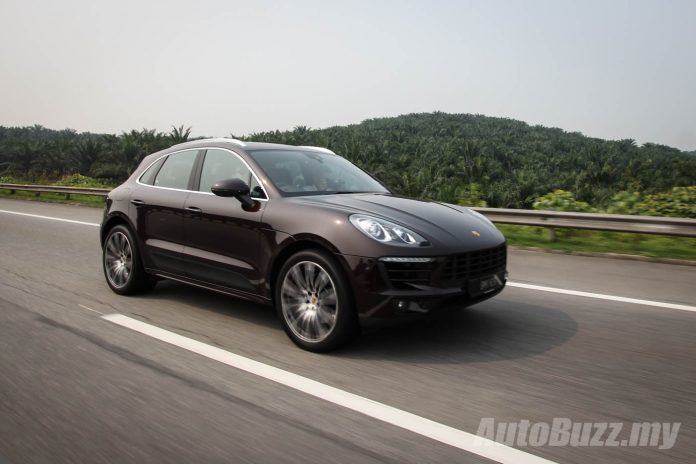 Proven track record shown from the hugely successful Porsche Cayenne has led to the birth of a smaller and compact SUV, the Macan. Porsche calls it ‘the sports car of the compact SUV segment’, which is by far the most powerful in its class. Sime Darby Auto Performance (SDAP) is eager to show us what it can do.

Before we begin, do go through the Macan line-up via our Quick Facts table below to avoid confusion. We managed to test all models during the Porsche Macan Road Tour except for the Macan Turbo, for some reasons.

The word ‘Macan’ means tiger in Indonesian and with its introduction in Malaysia, it also means the Porsche badge is now more ‘accessible’. Entry level Macan starts from only RM420,000 (the most affordable in Porsche’s stable now) all the way to RM785,000.

Just like how its big brother shares its platform with the VW Touareg, the Macan is loosely based on the Audi Q5. However we do notice that Porsche does not want us to think the Macan as a shrunk Cayenne. Instead, they sell it as a practical 911 – on stilts that is.

Nicknamed the ‘baby Cayenne’, it is smaller than its big brother: 174mm shorter, 81mm lower, but almost as wide only 16mm narrower. It does get quite a long wheelbase at 2,807mm which is only 88mm shorter than the Cayenne’s 2,895mm wheelbase.

The Cayenne immediately looks intimidating when compared side by side, which makes the Macan a more ideal urban SUV in terms of size thus manoeuvrability as well.

Untrained eyes may need to stare at it for a bit to tell if its the Macan or Cayenne. A new feature on the Macan is the aluminium clamshell bonnet design with a raw air duct integrated on the underside to ventilate the engine. The long hood together with the large front air intakes simply screams “Get out of my way!”. A sight to behold in the rear view mirror.

The Macan inherits design cues from its cousins that reflects Porsche’s sports car heritage. Starting from its side profile; the sloping roofline and body curves to the rear that amplifies the broad sculpted wings, and D-pillar are from the 911.

Then there’s the ‘dark patch’ at the bottom of both front and passenger doors, which I thought it must have a certain special ability to improve the car’s performance, the German kind of way ja. Indeed there is, well sort of. The ‘sideblades’ from the 918 Spyder are to create an illusion of lower and narrower doors, for a compact and sportier look (meh). They are available in the form of different materials as options.

The headlights design gets the 918 Spyder look. All models are fitted with projector-type halogen lights while Macan Turbo receives bi-xenon headlights, which is available as options for all. Day Time Running Lights (DRL) on the bi-xenon unit are four-dots fancy LED spotlights, which are very unique. Halogen ones get the DRL in the inner headlight

Moving on to the rear are the 3D design LED rear lights, reminiscent of the ones from 918 Spyder. Not only it’s mesmerizingly good looking, its brake lights also pulsates when driver applies panic braking to alert following traffic more quickly. Avoid getting hypnotized and remember to brake when you happen to see one pulsating.

The interior is unmistakably Porsche with its sports car like cockpit and luxurious ambience. This sports car on stilts is fitted with sporty seat position and steeply inclined 918 Spyder-based multi-function sports steering wheel.

Everything in the cabin feels top notch, the leather, buttons and the magnesium alloy paddle shifts are of premium materials. Except the indicator lever feels like it belongs in a VW Polo; the harsh ‘unoiled’ clicking when engaged.

Instrument cluster is a set of three round dials with the speedo on the left, rev-counter in the center and an optional 4.8-inch VGA multifunction display on the right. A clever display that also incorporates a 3D navigation map. It also shows the driver in real time how much power is currently distributed among all four wheel. Comes as standard in the Macan Turbo.

Center console display is a 7-inch touch screen panel that houses all the relevant settings and information. Bose and Burmeister surround sound system are made available as options for top class audio quality.

Porsche says buttons are grouped and placed ergonomically for easy access. Well yes and no. It’s more like a jam-packed ‘buttonvaganza’ party going on in the lower centre console.

Sport, Sport Plus, air suspension setting buttons and all other modes are left on the passenger side due to the how it was designed for left hand drive market. Just move them over laaah.

No complaints but praises for the excellent sport seats that holds you tightly. One really frustrating problem is the narrow driver’s side footwell with minimal space for left knee and foot to rest. Feels like driving in a mini skirt. It’s uncomfortable. Yea, I like to drive ‘kangkang’.

Space in the back seats isn’t impressive. Partly because of the 911 sloping roofline that has taken up some head room. Same goes to the boot space. That can be fixed instantly by folding down the rear seats for more room. Your kids can stay home then.

SDAP offers four variants of Macan imported straight from the 500 million euro Leipzig plant in Germany. All four come with active all-wheel-drive and a 7-speed Porsche Doppelkupplung (PDK) gearbox as standard. Porsche’s dual clutch transmission; whenever a particular gear is engaged, the next gear is already preselected. As a result, gear changes take place within milliseconds, with no interruption in the flow of power.

The standard Porsche Macan is powered by a 2.0-liter, 4-cylinder engine, generating 237hp and 350Nm of torque. With performance figures like 0 to 100 km/h in 6.9 seconds and top speed of 223 km/h, its fuel consumption figure is impressive: 7.2 litres per 100 km, making it among the most efficient compact SUV in its class.

Torque addicts like myself will like the Porsche Macan S Diesel: 258 horsepower and a whopping 580Nm of torque from its 3.0-liter turbocharged V6 diesel engine. It launches itself from 0 to 100 km/h in just 6.3 seconds (6.1 seconds with Sport Chrono package fitted) and goes all the way up to 230 km/h. Fuel consumption at 6.3 to 6.1 litres per 100 km.

Top of the range Porsche Macan Turbo, currently the most powerful in the compact SUV segment is powered by a new 3.6-litre V6 biturbo engine, spitting out a respectable 400hp and 550Nm of torque. It gets from 0 to 100 km/h in only 4.8 seconds (4.6 seconds with Sport Chrono package fitted!) This pussycat is able to achieve a top speed of 266 km/h. Fuel consumption is kept between 9.2 and 8.9 litres/100 km. Sadly we didn’t get to test this out.

The media drive organised by SDAP was a day trip from Porsche Damansara showroom to Ipoh and back. Through highways and some real exciting narrow country roads. My partner for the day Jehan and I started off in the Porsche Macan S, and immediately I can report that the Porsche Macan S is an all-rounder urban SUV.

Well then of course, a compact SUV that goes around town with a 340hp 3.0-liter V6 twin-turbo power plant, power delivery is impressive. Isn’t exactly instantaneous but there’s virtually no turbo lag. Put my foot down after Smart Tag exit, without even realizing it took me to 90kph in no time. Added on another 30kph, sap sap suey (easy peasy).

With Sport Plus mode activated, the Macan S turns into an entirely different redline rev-happy animal. Exhaust and engine sound tasty too, but sadly you can hardly hear it while driving. Speaking of which NVH (Noise Vibration and Harshness) quality is kept at optimum level which makes the drive even better.

We then hopped into the 258hp standard Macan which obviously isn’t as powerful as the bi-turbo V6 Macan S. Its 350Nm of torque however does feel sufficient for a fun drive. Definitely more than enough to be a city run-about soccer-mom-mobile.

After lunch in Ipoh, we got into the red upholstery 258hp Macan S Diesel, which is the gem. It drives much like the Macan S only with much more torque; 580Nm of them! What’s more amazing is that it doesn’t sound like a diesel. In fact, it sounds really good. *goosebumps*

The 7-speed PDK gearbox works perfectly in all variants, quick and responsive gear changes, be it automatic or manual paddle-shifting. Taking the Macans through winding trunk roads with surprisingly minimal body roll, responsive steering wheel and quick gear changes turned out to be real fun. No off roading sessions though.

So, is this car for you? Well, if you are looking for a compact SUV and expect it to perform like a 911, then no. However, if you’ve been itching to own a Porsche and have been waiting to start somewhere, then YES. For a Porsche, it’s quite a bargain. After all, it’s easier to convince your wife that you are buying a SUV.

The closest competitor is this league would be Victoria Beckham’s Range Rover Evoque and let’s throw in the weirdly good-looking Infiniti QX70 for comparison sake.