Lexus has just revealed their latest Grand Touring concept car, codenamed the LF-C2, at the 2014 Los Angeles Auto Show. According to Lexus, the LF-C2 is a design study that will be a key determinant in the brand’s future styling direction.

The idea behind the LF-C2 concept is derived from a drop-top sports coupe, and Lexus says that no soft or hard top are available to cover the cabin. Fret not, it’s just a concept car and we can pretty much expect at least a soft top if the car goes into production.

Exterior style is said to be influenced by how light interacts with the various surfaces of the car. As such, the designers have sculpted the LF-C2 in such a way that would allow the concept roadster to exude a different character when viewed from different angles under different lighting conditions.

To achieve just that desired effect, Lexus chose to go with the bright golden yellow paint specifically produced as such – primer makes the base coat, followed by a few coats of silver, clear coat and finally the yellow paint that reflects off the silver.

“We’ve been instinctively drawn to and inspired by things that capture the beauty of light,” said Yasuo Kajino, Chief Designer of the LF-C2.

It appears that Lexus is going gaga with their signature spindle grille. The concept’s grille features a braided mesh design theme that changes its appearance at different angles under different lighting conditions as well. At the front are air vents that feed cool air to the brakes and functions to manage airflow through the body, keeping the car stable at higher driving speeds.

At the back you’ll spot Lexus’ L-shaped tail lights that is becoming increasingly common in most of their newer models. There’s also the chrome-accented quad tailpipes, while the car sits on 20-inch five-spoke alloy wheels.

Inside, the LF-C2 aims to evoke the sense of luxury and top notch finishing, just like any other Lexuses. Stuff like the head unit, remote touchpad, analogue clock and multi-function steering wheels will very likely be offered in the actual production unit, and it isn’t something that Lexus hasn’t done before.

So there you have it, Lexus’ latest 2+2 roadster concept, the LF-C2. 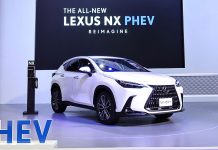