Home News Ferrari F60 America unveiled, all 10 units sold out to distinguished US... Earlier this year, Ferrari announced that their strategy to produce a limited run of cars to increase the brand’s exclusivity has proven to be successful, with the brand reaping in more profits than the preceding years despite selling lesser cars. Now, after 60 years of the Prancing Horse’s presence in North America, Ferrari has decided to produce a strictly limited edition car known as the F60 America, which was revealed to private guests at Beverly Hills City Hall.

Just 10 units of the F60 America will be built – and customarily – sold to the few selected loyal Ferrari enthusiasts. The F60 America gets the best of American tastes: a huge 12-cylinder engine and open-top driving. The 6.3-litre V12 engine is the exact unit found in the F12 Berlinetta, of which the car is based on, and it makes 730 hp at 8,250 rpm and 690 Nm of torque at 6,000 rpm.

If no changes have been made to the powertrain and transmission, then it’s safe to assume that the F60 America will get the seven-speed dual clutch semi-automated gearbox with specified gear ratios to match the engine’s output.

The F60 America is built based on the F12 Berlinetta, but have been given an extensive makeover inside and out. From the front, it adorns Ferrari’s classic single front grille with chrome highlights, and the bumper gets an integrated air intakes to cool the brakes. As seen from the outside, the bodywork gets the classic North American Racing Team livery, and the exclusive Ferrari 60th anniversary Prancing Horse badge on the wheel arches.

Its interior gets a rather unconventional touch – the driver’s side is finished in bright sporty red, while the passenger side gets finished in black. The theme is said to be inspired by Ferrari’s historic competition cars. Composite materials (high grade plastic or carbon fibre we assume) are extensively used in the interior, such as the dashboard, centre console and door panels of the driver side. The racing seats also feature a stylised American flag on the centre of the seats.

The black-tie event also featured a display of 60 of the most iconic Ferraris ever created, such as the 308 GTS (Magnum, P.I), Testarossa (Miami Vice), and Steve McQueen’s Ferrari 275 GTB/4.

For those of you who want a shot at owning something like this or any other limited edition cars from Ferrari, you might want to start having your own collection to inch your way into the brand’s good books. 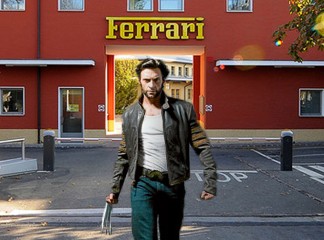