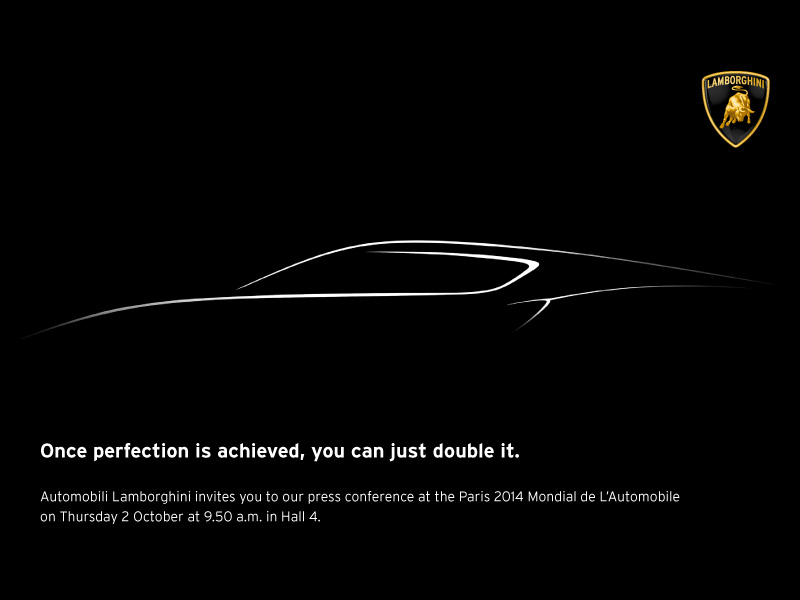 Automobili Lamborghini released a teaser image indicating that they might possibly revealing a four-seater car. The teaser image also mentioned “Once perfection is achieved, you can just double it.“, further hinting that it might be a 2+2 car.

Nothing much was revealed other than an image of a few slashes suggesting at the vehicle’s silhouette. There are no mention about the powerplant either. However the time and location indicates that it will be revealed at their press conference at the 2014 Paris motorshow on 2nd of October at 9:50 a.m.,  in Hall 4 to be more precise.

This soon-to-be-revealed car will not be Lamborghini’s first four-seater. In the late 60’s there was the Espada, a two-door four-seater powered by a 4.0-litre V12 engine, and who can forget about the “Rambo Lambo”, the LM002 4WD behemoth back in the 80’s.

Since then Lamborghini have not produced any four-seater vehicle, but they did showed us a couple of concepts such as the stylish four-door Estoque in 2008 and the Urus SUV a couple of years back and neither one have yet to enter the production line. All we have to do now is wait for the official reveal on 2nd of October. Watch this space!