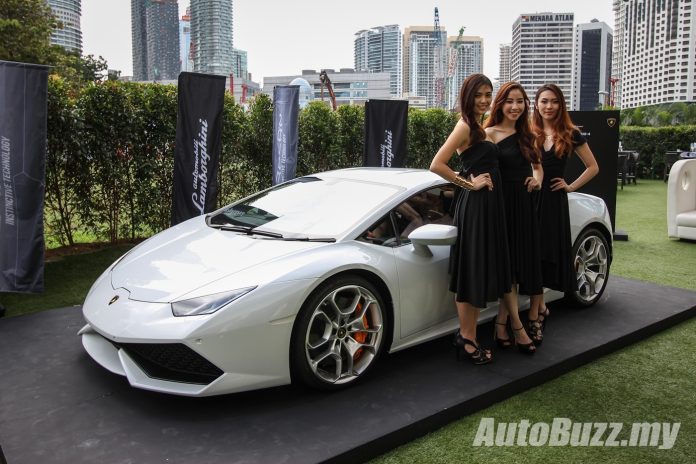 Debuted at the 2014 Geneva Motor Show in March, Lamborghini’s Gallardo replacement called the Huracan has now officially launched by JH Italia Sdn. Bhd. here in the heart of Kuala Lumpur. The Gallardo has been the most successful Lamborghini to date, so the Huracan really has some big shoes to fill.

The smallest model in the Lamborghini family has always been providing drivers with a more accessible performance from the illustrated Italian brand, compared to the full-blown V12 in the flagship Aventador.

Even so, it is still a Lamborghini through and through. All new from the ground up, even the V10 engine in the Huracan is claimed to be a new unit and different than the one in the outgoing Gallardo.

EXTERIOR
The Huracan can’t be mistaken for anything else other than a Lamborghini. All the styling cues from the bigger Aventador is present in the Huracan and it looks equally sinister too.

Everything is sharp on the Huracan, even the full-LED headlamps with “double-Y” daytime running lights can cast a piercing stare to anyone nearby. The gaping air intakes in the front bumpers are filled with a hexagonal mesh complete with 3D texture on the mesh itself.

The wing mirrors continue the sharp theme, but the doors open conventionally unlike the scissor-doors that are reserved for the V12 Aventador. There are two air intakes on each side, the bigger top intake feeds air to the engine, while the smaller lower intake feeds the brakes.

At the back, it features LED taillights, and those huge quad tailpipes will deliver the noise you can only expect to come from a Lamborghini. The particular model shown here during the launch have a slatted engine cover, but there’s option to showcase the V10 heart under a clear see-through engine cover.

INTERIOR
The fine cockpit is trimmed in leather and Alcantara, from the seats and even to the dashboard top. Some of the basic controls have been reorganized, such as the turn indicator and wiper switches now reside on the steering wheel as opposed to the normal stalks.

The steering wheel itself is very compact with flat bottom base. There you can also find the ANIMA switch for the drive mode, Strada, Sport, or Corsa. Behind the wheel, a 12.3-inch full-color TFT screen is used to display the rev counter and other vital vehicle information including the navigation map.

A smaller screen displaying oil temperature and battery information sit in between the dash and the raised center console. Just below it there’s a row of toggle switches for the windows and others, but the main centerpiece has to be the engine start/stop button complete with a bright red flip-top cover.

PERFORMANCE
Although the Huracan is not a hybrid car, the chassis of the Huracan is. A combination of carbonfibre and aluminium chassis makes it a stiff construction, and it also contributes to the supreme power-to-weight ratio of just 2.33 kilograms per horsepower.

The Huracan LP610-4 gets its power from a naturally-aspirated 5.2-litre V10 with Iniezione Diretta Stratificata (IDS) that combines direct and indirect injections. As the name suggested, it delivers 610 hp at 8,250 rpm and 560 Nm of torque at 6,500 rpm to all four wheels.

The new 7-speed Lamborghini Doppia Frizione (LDF) dual-clutch gearbox is the first to be fitted in a Lamborghini. The gearbox works in conjunction with the driving mode selected by the driver.

Like most new cars nowadays, the Huracan also comes with Stop & Start technology as a measure to reduce its fuel consumption. In case you’re wondering, the fuel consumption is rated at 12.5 l/100 km.

WHAT ELSE?
To date, 2,500 units of the Huracan have been spoken for and Mr. Sebastien Henry, Head of Operations, South East Asia Pacific for Automobili Lamborghini mentioned that there are already 20 orders in Malaysia even before the car is launched.

With this official launch event and the availability of the first right-hand drive Huracan here, he is confident that the numbers will keep on increasing. The on-the-road price has not been finalised yet, but the Huracan is expected to cost at least a cool RM 2.1 million.