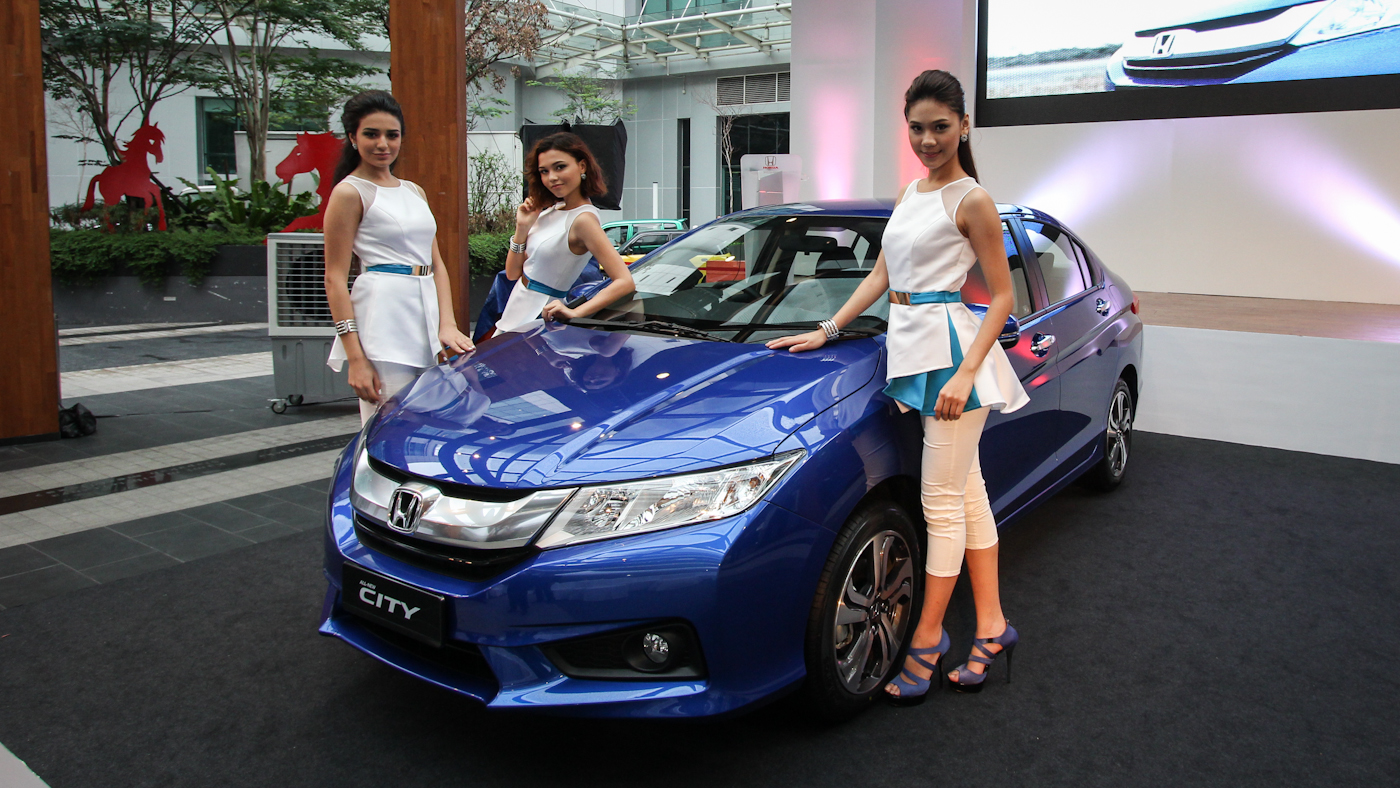 You may have already seen the all-new Honda City online for quite sometime now. It is finally here in Malaysia today. The 2014 Honda City is officially launched by Honda Malaysia at Publika Shopping Gallery. There are four variants to choose from and prices are between RM75,800 to RM90,800.

There are a total of 2.2 million units of Honda City sold since its global debut in 1996. More than 145,000 units are on Malaysian roads alone since 2001. With the introduction of the fourth generation City that comes with two extra variants, Honda Malaysia is aiming to sell 2,500 units monthly.

Refer below for specifications on all four variants.

Exterior
Generally, this new car is slightly bigger than the outgoing model by 25mm. Appearance wise, does vary depending on which variant you are looking at. In this case, let’s examine the hi-spec V model. Designed from the ground up, the front look is mainly dominated by the new wide Platinum Grille,  which you may need to take awhile to get use to. Headlights however are still halogen ones, together with front fog lights.

You’ll also get a pair of indicator lights on the auto retract side mirrors and 16-inch alloy wheels. Whereas the rest of the variants get 15-inch rims only. Going along the side, it does have a distinctive and deep shoulder lines. A quick glance from the rear, you may think it’s a BMW 3-Series due to how the rear lights are designed.

Interior
“Man Maximum, Machine Minimum” is Honda’s philosophy in developing the car, focusing on premium comfort and spaciousness for its occupants. Wheelbase is made longer by 50mm providing the largest cabin space in its class. A total of 6 airbags are fitted in the cabin; dual front airbags, i-Side airbags and Side Curtain airbags. Seats and upholstery come in black fabric in all variants. The dashboard has a new design, that creates a floating effect.

The top-range City V is equipped with 7-inch touch screen display that controls the infotainment together with 8-speakers audio system. It also has the interesting touch panel climate control, which is something new. The multi-function steering wheel has the hand-free telephone steering switch as well.

There are enough cupholders to hold a small party in here, eight to be exact. Should your party guests require quick charging for their digital devices, there are three power ports in total. In which two are below the rear aircond vents. Thanks to the increase in wheelbase and focus to cabin space, rear occupants get quite a bit of legroom. This car has the largest boot space in its class, 536 litres of it, plus a 60:40 foldable rear seats.

Performance
All four variants are powered by the same 1.5-litre i-VTEC engine that is paired with the Earth Dreams Technology CVT gearbox, which generates 119 horsepower and 145 Nm of torque. It can go at the maximum speed of 190 km/h and acceleration of 0 to 100 km/h in 10.8 seconds. There is a ECON button function that will setup the car for a more economical drive.

What else..
This fourth generation Honda City is a CKD that comes straight from the Malacca plant. Honda Malaysia has also confirmed that the Honda City Hybrid is in development stage in Japan and that they hope to offer it in Malaysia as soon as possible. That will be locally assembled as well.

The all-new 2014 Honda City comes in four variants the City S (RM75,800), City S+ (RM78,800), City E (RM83,800) and City V (RM90,800). It well covered by a 5-year warranty with unlimited mileage. 1,800 buyers have placed their bookings since its pre-launch last month. If you are looking to get one, you can choose from the following five colours; Modern Steel Metallic, Alabaster Silver Metallic, Taffeta White, Crystal Black Pearl and the new Brilliant Sporty Blue Metallic. Should you want to sportify your car, there’s the original Modulo accessories. All-new Honda Civic to launch soon in Singapore – Malaysia too?