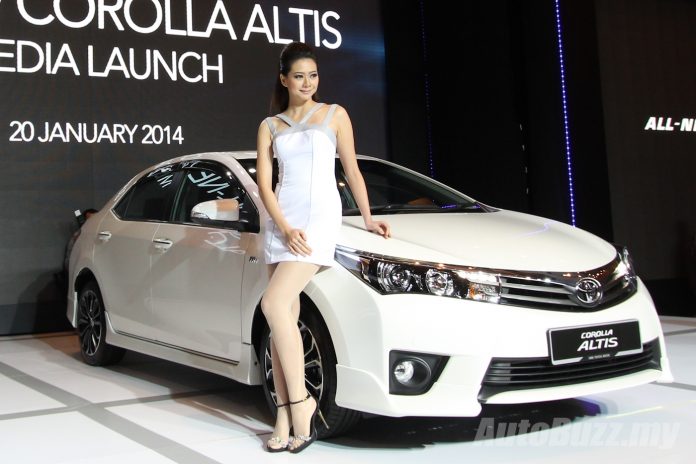 UMW Toyota Motor has finally unveiled the all-new Toyota Corolla Altis today after much anticipation. The ever popular Toyota Corolla is now in Malaysia. “A New Generation of Style and Excitement”, as how Toyota describes the new Altis, with its new upgrades and enhancements. Comes in three models, 1.8E, 2.0G and 2.0V.

The first Toyota Corolla was introduced in 1966, since then 40 million units of Toyota Corolla have been sold worldwide, making it ‘the world’s favourite car’. Now at its 11th generation, the Japanese automaker has carefully designed and developed the all-new Toyota Corolla Altis to ensure they maintain its popularity.

It does seem like Toyota is slowly moving away from its conventional appearance for a ‘keen look’ design concept. Many would would agree this new Altis is very good looking.

As reported earlier, the are three models to choose from, 1.8E, 2.0G and 2.0V. The 2.0V being the hi-spec version comes with more features. So much more, it makes the 1.8E and 2.0G look really, ill-equipped? We will point out some differences along the way.

Exterior
Many of you may have already decided to place an order for this C-segment Toyota, so we’ll start off with colour choices. There are five to choose from; White Pearl Crystal Shine, Attitude Black, Silver Metallic, Gray Metallic and Dar Brown Mica Metallic. This new Altis is longer (length: 4,620mm) and wider (width: 1,776mm) as compared to the previous model; by 80mm and 16mm respectively. However, the designers still managed to make more room in the car by increasing the wheelbase by 100mm.

On the outside, the 2.0V gets a handsome LED projector headlight with Daytime Running Lights (DRL) while both 1.8E and 2.0G got halogen bulbs. The exterior has been designed to improve fuel economy and reduce wind noise. Aero-stabilizing fins design is applied on parts of the car; wing mirror, rear lamps and bumper corners. Bigger and sportier 17-inch rims for the luxury model and 16-inch rims for the other two.

Interior
The dashboard has a fresh new look that comes in two different audio systems depending on models. A 7-inch touch screen DVD -AVX audio system for both 2.0V and 2.0G. It includes  USB slot, Aux-in, SD slot, Bluetooth connectivity and also a reverse camera. The 1.8E however gets a standard 2-DIN head unit, without reverse camera of course.

The hi-spec 2.0V gets the Smart Entry & Start system and Auto Electro Chromic Mirror. None of these in the 2.0G and 1.8E.

Toyota describes the new seats in the Altis ‘prevents the pelvis from wobbling’ via its extra bulges to fit driver and passengers better. Seats in 2.0V comes in leather with driver side 8-way power seat, whereas the 1.8E and 2.0G in fabric with manual driver seat. The rear seats are fordable with its 60:40 split for extra luggage space. There’s also a 5-step reclining function for rear passengers, which is good for long distance drive.

With the increase wheelbase length, rear seat knee clearance has been increase by 92mm. The car windscreen has acoustic glass, which is an extra layer of laminate in the windscreen glass to reduce wind noise. Insulating materials are also placed around the car structure to reduce  noise level in the cabin.

Safety & Security
Toyota is only offering dual airbags in these Corolla Altis, driver and front passenger side only, which is a little disappointing. However, should you need more airbags, Toyota is offering an additional safety package, 7 SRS airbags in total. This package also includes passenger seat seatbelt  warning indicators. For your information, based on Toyota’s internal test, the new Corolla Altis safety rating is equivalent to 5-star ASEAN NCAP, with the safety package installed. As for security, all Altis models come with Toyota Premium Security & Solar Film tint.

Visit the official webpage or Toyota showroom to get up close and personal with the all-new Toyota Corolla Altis, or visit its nationwide roadshow which will begin on this Friday, 24th January. For now, enjoy the images taken from the media launch below.