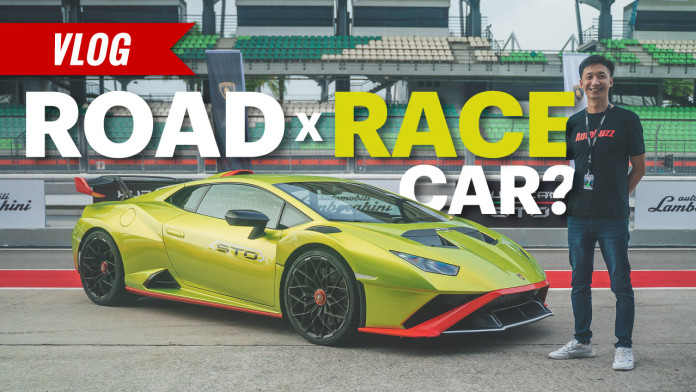 Lap after lap, the same thought kept popping up in my head while behind the wheel of the Lamborghini Huracan STO – how is it possible that the public is allowed to buy such a car?

Everything about the Huracan STO – from its acceleration, braking performance, steering and throttle response, gear changes – have been turned up to ‘Max’ by Lamborghini. Whether through corners or on the straights, it just lights up all the senses – making you feel a live as it comes alive.

The main source of this menace rests just behind the shoulders of the both occupants – a 5.2-litre naturally-aspirated V10 engine with 640 hp and 564 Nm – with a roar so thunderous, it can even wake the dead.

Brute force and ultra responsive controls – whether brakes, steering or throttle – aren’t the only reasons for the Huracan STO’s fiesty behaviour. A lot of sensory overload is a result of how light the car is. Weighing just over 1,300 kg, the Huracan STO is only as heavy as a Honda Civic but with nearly three times the performance and braking power as its fitted with 6-pot brakes in the front.

It’s also over 40 kg lighter than the Huracan Performante; a result of extensive use of carbon fibre on its body. Over 75% of the Huracan STO’s exterior is made of carbon fibre. That also includes the ‘cofango’ front section featuring the front bonnet and fenders as one single piece. Adding more lightness are 20-inch magnesium wheels, a titanium roll cage developed with Akrapovic, a lightened windscreen, and carbon fibre bucket seats.

Has that triggered your curiosity? Watch and listen to howl of that V10 now!