Home News Porsche and Audi will be joining Formula 1 from 2026, says VW... 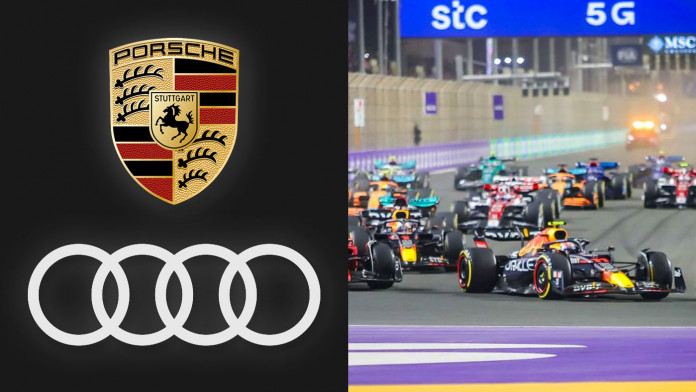 After what seems like years of rumours and speculations, Audi and Porsche are now finally confirmed to be joining the Formula 1 circus starting 2026, with the final official word coming directly from the horse’s mouth – Volkswagen CEO Herbert Diess.

According to a report by Reuters, Diess said at an event in Wolfsburg this past Monday that the board essentially “[ran] out of arguments” against joining F1, after the brands made a case that the move will bring in more money than it will cost.

From the report, Audi is ready to offer up to EUR500 million (approx. RM2.3 billion) to buy out McLaren (including McLaren Automotive and its racing team) as a mean to enter Formula 1, although BBC reported that talks are also ongoing with Sauber (Alfa Romeo Orlen Racing), Williams, and Aston Martin.

Meanwhile, Porsche intends to establish a “long-term partnership” with Red Bull Racing, particularly the team’s new engine division, to mark its entrance into the motorsport series by supplying new engines from 2026. Diess says that as of Monday, Porsche’s preparations for entering Formula 1 were a little more concrete than Audi’s.

ALSO READ: The retro-styled Porsche 911 Sport Classic is the most powerful manual 911 you can buy

Formula 1 will be introducing a new set of engine regulations in 2026, which are designed to be fully-sustainable, tying in to the sport’s plan to reach net-zero carbon emissions by 2030 with the use of synthetic fuels. Porsche, if you recall, has (coincidentally?) been investing heavily into this area in recent years.

Diess said that the new regulations will be the perfect entry point, as it helps even out the playing field for new competitors. “You can’t get into Formula 1 unless a technology window opens, you need a rule change to get in there,” he added.

Since the introduction of the Turbo Hybrid era, Formula 1 has largely been dominated by VW’s German Rival Mercedes, although they’ve not risen to the same standards this year with the newly-implemented aerodynamic regulations.