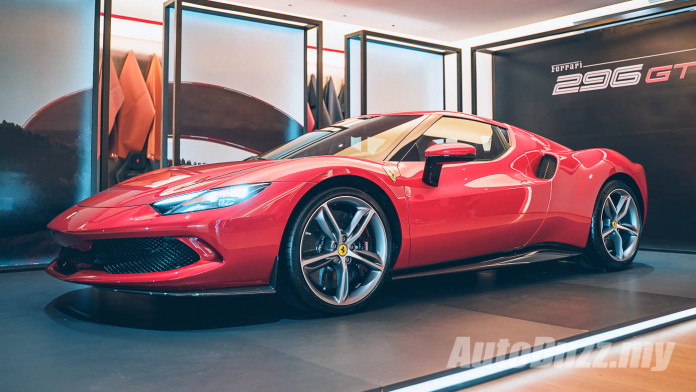 Whether you like it or not, Ferrari’s future will be full of flowing electrons and downsized engines. And the first entry into the new era, the Ferrari 296 GTB, has now made its way into Malaysia.

The 296 GTB is a two-door, two-seater addition to the 458, 488, and F8 line-up that started what seems like aeons ago now. But aside from those similarities, the 296 is truly unlike any other car Ferrari has ever put on the roads.

The reason for that is none other than the beating heart underneath the sheet metal. The 296 GTB is powered by Ferrari’s first-ever V6 engine in a production model (technically), and comes right out of the gate with electrified bits too.

The Ferrari 296 GTB’s performance is helped by a whole swath of new electronic devices, including the brake-by-wire system that integrates with the car’s new ABS control module and the six-way Chassis Dynamic Sensor to push the grip limits of the rear tyres for faster acceleration out of corners, as well as an updated side slip control system to further enhance the car’s cornering capabilities.

Compared to most other recent Ferraris like the F8 and SF90 that has a more “in your face” look, the all-new 296 GTB here carries a more pared-down, almost sensuous design language, with sleek curves and clean lines not unlike that of the Roma.

Despite the more “sophisticated” appearance, its short wheelbase and muscular wings still gives it a sporty silhouette (without being aggressive), and is complemented by new design ideas such as the “visor-style” windscreen, the Kamm tail on the rear end, vertical rear screen, the single central exhaust tailpipe exhaust, and an integrated retracting spoiler.

Its smooth curves do more than just look good, however – each and every body panel has been deliberately designed to function as aerodynamic devices, to either channel air into the cooling vents, or generate downforce.

Even without any eye-searing aero appendages – aside from the deployable rear wing – the new 296 GTB still makes upwards of 360 kg of downforce at 250 km/h.

For buyers who want to take their 296 GTB to the next level, Ferrari is also offering a Assetto Fiorano package for the sportscar which adds additional carbon-fibre aero bits for an extra 10 kg of downforce, a set of special GT “racing-derived” adjustable Multimatic shock absorbers that is optimised for track use”, as well as extensive use of carbon fibre and other light-weight materials both inside and out, resulting in a weight reduction of up to 15 kg.

The Assetto Fiorano package also includes, optionally, a special design livery inspired by the Ferrari 250 Le Mans race car, which runs from the front wings and extends all the way to the rear spoiler.

If you’ve been in any recent Ferrari models like the SF90 Stradale, the cabin of the 296 GTB will look very similar, carrying a very modern, minimalist, and digital-focused appearance.

Among the key highlights in the Ferrari 296 GTB’s cockpit are the fully-digital instrument cluster, the touch-sensitive steering wheel buttons including the capacitive ‘Start Engine’ button, two side satellite panels beside the instrument cluster each with their own capacitive touch area for lighting and climate control settings, the new eManettino switch, a head-up display that is “integrated into the leather trim”, as well as the electronic “gated” gearshift levers.

As is standard in a Ferrari, you’ll also find a whole ocean of premium Italian leather, which the buyers can customise to their own liking, alongside a unique storage compartment in the centre console to “display” your key fob’s Prancing Horse badge.

The Ferrari 296 GTB is now available for order in Malaysia, starting from a base price of RM1,228,000 before customisation options, duties, taxes, and insurance. In practice, we’re expecting an on-the-road price north of RM3 million.

Included in the price is a standard Ferrari extended seven-year maintenance programme, which covers all regular maintenance for the first seven years of the car’s life.