Bugatti has held close links with the aviation world for over 110 years. The automaker’s racing team had drivers who also flew for the French Air Force and legendary French aviator, Roland Garros, owned a Bugatti Type 18 to be as fast on the ground as he was in the air.

Monsieur Bugatti has even developed an aircraft for the purpose of breaking speed records, but the occurrence of the Second World War ended that project.

At the tail-end of 2020, Bugatti introduced the Chiron Sport “Les Légendes du Ciel” that paid homage to the company’s dual-role daredevil racing drivers and pilots. One of the unique decorative items in the interior of the limited-edition Bugatti is the hand-sketched racing scene between the Nieuport 17 aircraft and a Bugatti Type 13, which symbolizes the two souls honoured by the edition.

Yesterday, Bugatti and the French Airforce recreated this land and air race with the Chiron Sport “Les Légendes du Ciel” and the pride of the French defence force, the Dassault Rafale.

This is the second occasion where a modern Bugatti took on a modern fighter jet in a drag race, where the first race saw a Veyron 16.4 raced a Eurofighter Typhoon and was broadcasted on the popular Top Gear television series.

The special, matt-grey “Gris Serpent” paintwork on the Chiron Sport “Les Légendes du Ciel” features the signature W16 engine and a capacity of 8.0 litres delivers 1,500 hp and 1,600 Nm of torque. Power is fed through a seven-speed dual-clutch transmission and then sent to all four corners. Its maximum speed is electronically limited to 420 km/h. The edition, limited to 20 units, costs EUR2.88 million net (RM14 million) each.

The Dassault Rafale combat jet meanwhile has a total of 58,550 newtons of thrust from its two jet engines and capable of hitting 1,975 km/h or 1.6 times faster than the speed of sound (Mach 1.6).

“I pulled away from the Rafale over the first few hundred meters, but after a few hundred meters more it was around 20 meters above and alongside me in the air. An incredible and fantastic sight,” said driver Pierre-Henri Raphanel. The Rafale fighter jet started to take off at just 260 km/h after 450 metres on the aircraft runway.

On a much smaller scale, but still, mega entertaining to end the work week, check out some of Autobuzz.my drag races that feature local heroes, German firepower as well as recreational workhorses. 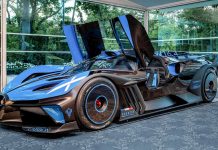