Home News The Hennessey Venom F5 is here, with a purportedly over 500 km/h... Three years after it was first teased, Hennessey has now finally unveiled the Venom F5 in the flesh. Only 24 units of this ultra-exclusive hypercar will ever be made, priced at USD2.1 million (MYR8.52 million) each, and they will all be uniquely customised to the owner’s specifications.

Powering this speed monster is an in-house built 6.6-litre twin-turbocharged V8 engine, affectionately named “Fury” by Hennessey, and is paired to a seven-speed single-clutch semi-automatic gearbox. Power output is rated at an eye-watering 1,817 hp and 1,617 Nm of torque at full blast. Yowza.

The figures sound even more impressive when you realise that the entire car weighs just 1,360 kg, thanks to its various weight-saving measures such as the use of an ultra-lightweight carbon fibre monocoque. Even the entire engine weighs just 280 kg. As a result, the Hennessey Venom F5 accelerates from 0-100 km/h in less than 2.6 seconds, and smashes the 200 km/h point in 4.7 seconds.

Hennessey is so confident in the performance of the Venom F5 that it will be proving its top speed “in excess of 500 km/h” with an independently verified top speed run next year. For full transparency, Hennessey will also be making available the GPS data and uninterrupted video footage for the public to inspect.

Hennessey founder and CEO John Hennessey has also provided input in “every aspect of the car’s specification, design and development”. “Our customers love speed, so we’re fired-up to push the boundaries of what’s possible to attempt the world’s fastest production car record, but the Venom F5 is about more than just speed and power,” said Hennessey.

“This car will handle superbly, quality is exceptional, there are more than 3,000 bespoke parts, materials are exquisite, everything is a fitting tribute to 30 years of the Hennessey brand.”

Deliveries for the Hennessey Venom F5 will begin next year, just in time for the company’s 30-year anniversary. 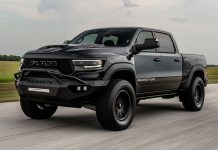 This is the fastest pick-up in the world, the 1,012 hp Hennessey Mammoth!

This new hypercar aims to take down the Bugatti Chiron, 0-300 km/h in under 10 seconds