Nissan is celebrating the 10th anniversary of the Nissan LEAF electric car and the delivery of the 500,000th LEAF since the model was first introduced.

Produced at plants in Japan, the U.S.A, and the United Kingdom, the zero-emission LEAF is sold in 59 markets around the world.
Over its lifespan, the Nissan LEAF has been more than just a mobility solution. It has helped power homes and businesses while providing emergency electricity during natural disasters.

A few months ago, Nissan extended its electric vehicle legacy with the Ariya all-electric crossover. The Ariya is a key model in the company’s Nissan NEXT transformation plan, under which the company plans to sell ome million electrified vehicles annually by 2023, including EVs and vehicles with e-POWER electrified powertrains. 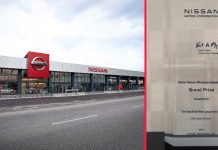