Lamborghini has unveiled the Huracan STO – which stands for Super Trofeo Omologata, a road-homologated Super Trofeo race car essentially. Being the spiritual successor to the Performante, the new STO will be the flagship, most track-focused variant in the Huracan model line-up, and perhaps – a swansong to one of the best-selling Lamborghini models to date.

The new Lamborghini Huracan STO is powered by the same 5.2-litre naturally-aspirated V10 mill, making 640 hp and 565 Nm (-35 Nm). But unlike the Performante, drive is sent exclusively to the rear wheels just like its racing counterpart, which means its 0-100 km/h and 0-200 km/h times are a touch slower at 3.0 and 9.0 seconds respectively, and its top speed reduced by 15 km/h to 310 km/h.

However, with it being a racecar-inspired model, it is of course more than just the powertrain. As Lamborghini says it themselves, “races are won in corners rather than on straights”; among the key upgrades on the Lamborghini Huracan STO include an exaggerated aerodynamics package, which the marque says consists of technologies taken straight from the Super Trofeo EVO race car.

Up front, the Huracan STO’s front bonnet, fenders, and front bumper are now comprised of one single component, called the ‘cofango‘ – which is an Italian portmanteau of ‘cofano‘ (hood) and ‘parafango‘ (fender). Lamborghini says that this not only helps with weight reduction, but is also a timesaving access feature, as seen on their race cars.

There are new air ducts on the bonnet to increase airflow to the central radiator and generate additional downforce, while the cofango also incorporates a new adjustable front splitter at the front. Down the sides, the wheel arches have been reprofiled – specifically at the rear fitted with a new aircraft-inspired NACA air intakes for engine cooling, while the front wheel-arch now gets vents to bleed air pressure out of the wheel well to aid traction on the front axle.

The Huracan STO also gains a prominent air scoop on the roof, which extends rearwards into a shark fin (F1, anyone?), managing the airflow over the large adjustable rear wings inspired by the Super Trofeo race car. Lower down, the STO also gets a new rear air vents – complete with ‘STO’ branding, while there’s also an integrated lip spoiler on the rear decklid, and a more aggressive rear diffuser at the bottom.

With all of the new aerodynamic parts, Lamborghini says that the overall airflow efficiency on the Huracan STO is improved by 37%, while the overall downforce has been increased by an enormous 53% over the Performante.

Aside from just aerodynamics, the new STO also benefitted from an intense weight-loss programme. These include more than 75% of carbon fibre on its exterior panel – with a new ‘sandwich’ technique on the rear fenders which weighs 25% less while maintaining the same structural integrity, a 20% lighter windscreen, and magnesium rims – which are fitted with bespoke Bridgestone Potenza road or track tyres.

Inside, the door panels are completely manufactured out of carbon fibre – with a loop of fabric acting as the door latch opener, as are the sports seats. Overall, the scale tips at just 1,339 kg for the dry Huracan STO, which is 43 kg lighter than the already-lightweight Performante.

Other performance enhancements include a widened wheel track, stiffer suspension bushing, reworked anti-roll bars, as well as the brand’s MagneRide 2.0 electromagnetic damper control system. The rear-wheel steering has been retained from the standard Huracan, though reworked with a more direct and fixed steering ratio, designed specifically for more aggressive driving styles on the race track.

The brakes have also been upgraded with Brembo CCM-R brakes, which apparently includes materials that are used in Formula 1. The new brakes boast a 60% higher stress resistance, while the maximum brake power improved by 25%, and longitudinal deceleration by 7%.

Deliveries for the Lamborghini Huracan STO will start in spring 2021, with prices starting at EUR249,412 (RM1.2m) in Europe, without the Ad Personam personalisation service – which gave the launch car a glorious gulf-like livery – and other options, of course. 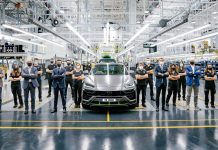