The “Pouncing Wombat” is back in both sedan and “liftback” layout and Mazda said it’s purer, more minimalist and better than ever! The new Mazda 3 is available in five different variants with prices starting from RM139k to RM160k.

The two base models are offered with 1.5-litre engines with 118 hp and 153 Nm while the “High” and “High Plus” models get the more powerful 2.0-litre engine with 162 hp and 213 Nm of torque. Both engines are paired to a 6-speed automatic transmission.

The star of this show is undoubtedly the Mazda 3 LiftBack, which upon closer observation, does not shy away from the concept it was based on – the Kai Concept.

You may have gawked over its pictures but nothing prepares you for the sheer beauty and soul in motion of the actual car. Among the notable features offered include LED DRLs both in the front and back, 18-inch wheels, sunroof and keyless entry.

Is the pouncing wombat still as ferocious as it was before? Here’s what GC Mah thinks! 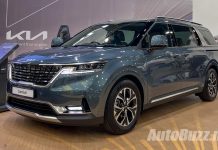