Home News Porsche has beaten its own Nürburgring record with the Porsche 919 Hybrid... 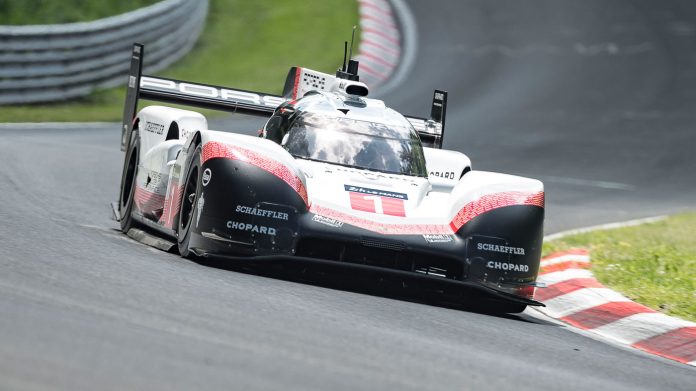 On 28 May 1983, Stefan Bellof claimed the lap record of the Nürburgring Nordschleife when he got behind the wheel of a 628 hp Rothmans Porsche 956. The lap record of 6 minutes 11.13 seconds remained uncontested for 35 years and 31 days until recently when the Porsche 919 Hybrid Evo complete one lap of the Green Hell in 5 minutes 19.55 seconds.

The Evo version of the 919 Hybrid race car is based on the standard championship-winning race car at the FIA World Endurance Championship (WEC) that have been heavily reworked for maximum performance. Basically, a de-restricted Le Mans car.

Since Porsche did not have to comply with any regulations whatsoever, the 919 Hybrid Evo now develops a total system output of 1,160 hp and weighs only 849 kg (-39 kg) thanks to updated software and removal of non-essential items like air-conditioning, electronic race controls and more.

Engineers have also given the car’s aerodynamics a massive upgrade with new diffusers, larger rear wing and active aerodynamics (not available on WEC race). This resulted in 53 per cent greater downforce and an improved aerodynamic efficiency by 66 per cent, allowing the 919 Hybrid race car to tackle the Green Hell with greater aggression and composure.

Behind the wheel of the record-breaking lap is none other than Timo Bernhard, five-time overall winner of the Nürburgring 24-hours, two-time outright winner of the Le Mans 24-hours and reigning World Endurance Champion with the Porsche 919 Hybrid.

Climbing out from the cockpit, Bernhard said, “This is a great moment for me and for the entire team – the 919 programme’s icing on the cake. The Evo was perfectly prepared and I have done my best on this lap. Thanks to the aerodynamic downforce, at sections I never imagined you can stay on full throttle. I’m pretty familiar with the Nordschleife. But today I got to learn it in a new way”

The Porsche 919 Hybrid Evo completed one lap of the Nürburgring Nordschleife in 5 minutes 19.55 seconds with an average speed of 233.8 km/h around the 20.832 km track. Bernhard beat the previous lap record by 51.58 seconds.