Over 64 years ago in 1954, a determined Japanese man called Michio Suzuki designed and developed his first automobile with the assistance of a young engineering team – most of whom were in their 20’s.

Having produced only motorcycles previously, backed by a strong “Yaramaika” (Let’s do it in Japanese) spirit, a value deeply rooted in the region where Suzuki was from, he began researching on vehicles produced overseas in the build up to his first ever car, known as the Suzulight.

He used several European models as a benchmark, including an Austin 7 from the UK which was really popular at that time as it was available at a reasonable price.

The result was a lightweight, compact vehicle weighing just over 500 kilograms and was powered by a 360 c.c., two cylinder engine producing a measly 15 hp. It was also way ahead of its time as it was equipped with independent coil spring suspension and rack and pinion steering.

The Suzulight prototype breezed through the “Kei car” legislations and requirements and immediately prompted Michio Suzuki to begin road testing. The road tests was conducted across the mountainous region of Hakone which proved to be a real challenge as the 300 km stretch of road was not paved at the time.

The car was later on presented to the then President of ‘Yanase Auto’, Japan’s leading authority on automobiles, who stayed on late into the night to personally greet Suzuki and his team. Being thoroughly impressed with the Suzulight, the President gave Suzuki and his team the green light to put the car into production.

In 1955, Suzuki made the first two deliveries of the new production model to doctors, who used them on their daily rounds. From an initial productions of three to four cars per month, the monthly volume saw a spike to 30 units by early 1956.

Word is that there are only two original Suzulights left in existent, both in the Suzuki Plaza Museum in Hamamatsu City, Japan. 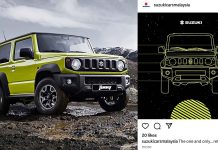