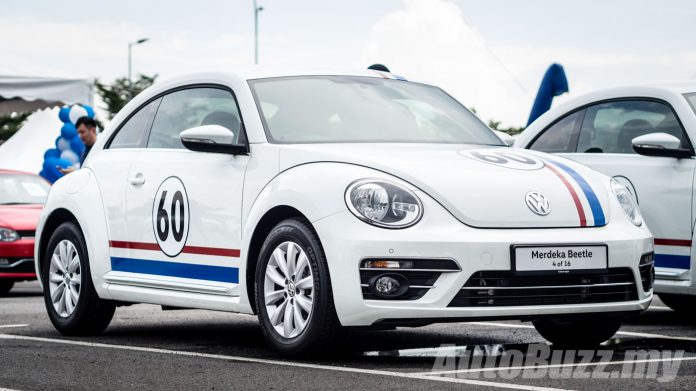 Volkswagen Malaysia at their Volkswagen Fest 2017 launched the Volkswagen 60th Merdeka Edition Beetle. Priced at RM136,888, it’s limited to 16 units only and is based on the Beetle Design 1.2 TSI.

As you’d expect, the special edition Beetle gets exclusive “Merdeka” livery, with blue and red stripes as well as the number “60” on the hood and sides. Other additions include a leather wrapped steering wheel, 5.8-inch touchscreen head unit with USB, Bluetooth and auxiliary support that’s hooked up to eight speakers. The seats are still fabric, covered in ‘Pepita’ cloth.

Under the hood is the same 1.2-litre turbocharged four-cylinder engine, putting out 104 horsepower and 175 Nm of torque. Drive is sent to the front wheels through a seven-speed dual clutch transmission (DSG).

Again, only 16 units will be made and it will only be available in Pure White and White Silver. Each purchase comes with 5-year warranty, 60 months road tax and a limited edition Beetle suitcase. The 60th Merdeka Edition Beetle is launched alongside the new Jetta ALLSTAR.

Those interested to view the Beetle as well as the rest of the Volkswagen family, drop by the Volkswagen Fest held from 11 to 13 August at Setia City Convention Centre. Existing Volkswagen owners can also enjoy a 20-point inspection and 15 percent discount on parts and labour for servicing.