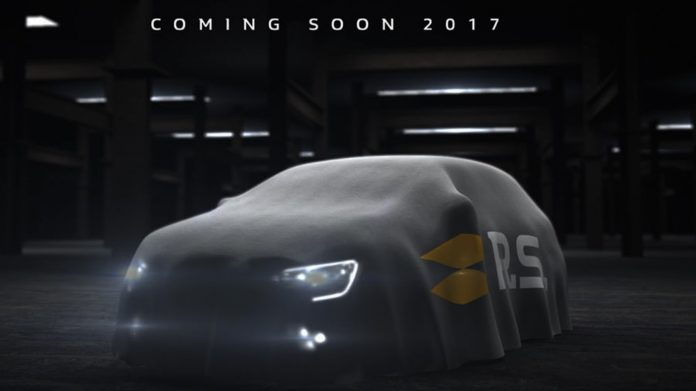 Ah, finally, a worthy successor looms. In response to Renault Sports’ one million followers on Facebook, Renault revealed the first teaser of the new Megane RS hot hatch. The Golf R rival from France will officially be launched later this year.

Not much can be made out of the picture above, but one thing is clear: the chequered LED fog lights are in place, just like the ones seen on the Clio RS 16 concept. The C-shaped LED DRLs are standard from the new Megane.

Right now, nothing is known about the engine, but it could be an improved version of the outgoing 2.0-litre four-pot. It should be turbocharged to produce over 300 hp, putting it right next to the Honda Civic Type R. A six-speed EDC dual-clutch automatic is offered for the first time, but enthusiasts will be delighted to know Renault Sport isn’t foolish enough to drop the six-speed manual transmission. Apparently, Renault is toying with the idea of four-wheel steering, up from the usual front-wheel drive application.

The new Megane RS has big shoes to fill, considering the illustrious achievements of its predecessor, such as the RS275 Trophy-R. It is expected to make its global debut at the Frankfurt Motor Show in September this year. Meanwhile,  find out what we think of the Renault Megane RS 265 Sport!