We have just three months before the year ends, yet Perodua is already on track to another great year. The company has delivered over 20,000 Perodua Bezza (more as we speak) to date, making it the highest recorded delivery within three months.

However, the numbers are still trailing behind 2015’s figures; in that same period, 157,500 Peroduas were delivered. Still, the 6,600 unit deficit is amazing considering the weak Ringgit and poor economic sentiment befalling Malaysians this year.

Despite the incredible numbers, Perodua is not resting on its laurels. They are driven to push for more sales before the year ends, and will be backed by events such as the “Test Drive and Win” contest, where one lucky winner will walk home with a brand new Perodua Bezza Advance! There’s also discounts for selected Perodua models for the month of October, where the Alza and Myvi command rebates of RM2,000 and RM4,200 respectively. 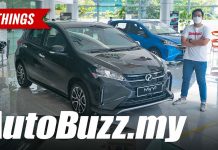