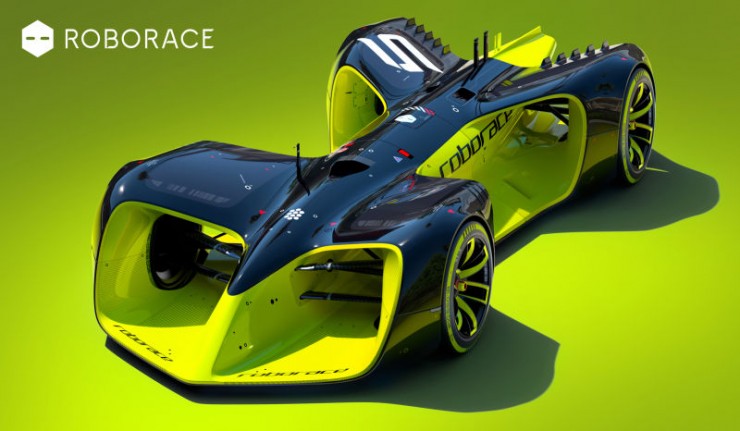 Roborace, an offshoot programme of Formula E which allows autonomous (driverless) race cars to race on city tracks, has unveiled a couple of preview images of their futuristic car. The designer of this Hot Wheels of a vehicle is none other than Daniel Simon, the man in charge of designing the Tron Light Cycles in Tron: Legacy.

The four-wheeled autonomous race cars will be programmed by algorithms and codes from teams to race on the track. The body is smothered with sensors to prevent cars from colliding with each other or into the wall, and the bodywork is very, very aerodynamically optimised. It’s bonkers how this actually looks like, and we love everything about it. Don’t for a second think that the car will only drive around in speeds that of an remote controlled car, no. Instead, Roborace’s Denis Sverdlov mentioned that the car’s top speed is close to 298km/h! It will have to rely on substantial downforce without unnecessary parts cluttering the car to maintain a clean look. Unlike the use of huge front and rear wings on F1 cars, Roborace cars will use the bottom portion of the car for aerodynamic. Active aero parts are also in the pipeline.

Simon said, “My goal was to create a vehicle that takes full advantage of the unusual opportunities of having no driver without ever compromising on beauty. Racing engineers and aerodynamicists have worked with me from the beginning to strike that balance.”

While his day job is as exciting as a certain beige saloon, he knows a thing or two about cars and motorsports. The true definition of motoring nirvana according to him is a clear and twisty tarmac surrounded with mesmerizing vistas, followed with a track list of indie tunes on the stereo. Any cars will do fine, not so for big MPVs which he loathes...
share on: