It wasn’t too long ago that DS launched the DS4 and what a looker that was. DS, as you may recall, is the ‘hipster’ division of French automaker Citroen. The marque has just brought out a facelifted version of their DS3 and DS3 Cabriolet. First launched in 2010, the DS3 has been a hit with customers placing over 390,000 orders for this Parisian supermini.

The new DS3 duo comes kitted with a few new features and can be specified with a variety of powerplants such as the new PureTech 130 three-cylinder turbo petrol engine that’s paired up with the latest-generation EAT6 automatic gearbox. New DS 3 and DS 3 Cabrio will also be available in a hot Performance spec model that boasts an impressive 208 hp.

Starting with the exterior styling, words such a avant-garde and Parisian come screaming immediately to mind but that being said, are we really that surprised? The front headlights are LED as you would expect, DS calls them the “DS LED Vision” light signature. The DS does utilise a fair bit of bling if you look at the sheer amount of chrome on the front end of these superminis, especially the grille. Visually speaking, only the headlights and front bumper seem to be the biggest changes to this new model.

On the inside, not much is different from the last apart from the addition of new toys such as the updated infotainment system that comes packed with Mirror Screen, courtesy of Apple’s CarPlay for iOS users and MirrorLink for Android users. These new toys allow drivers a smarter, safer and more enjoyable way of enjoying the apps on their smartphones.

As we mentioned earlier, DS is bringing out a few engine options for this refreshed supermini. The PureTech110 engine is the company’s latest three-pot mill that’s strapped to a turbocharger and as the name suggests, chucks out 110 horses and interestingly, 205 Nm of torque. Figures like that make for fairly enjoyable driving. But that engine option is just scratching the surface.

If 110 ponies just isn’t enough for you, worry not because the next engine option is just 20 hp away and better still, the PureTech130 mill can be had with a six-speed stick shifter. Additionally, this mill is up by 30 Nm. But what if none of these tickle your fancy? Fret not for there is a DS Performance version that cranks out 208 hp and an astonishing 300 Nm of twist. All of that on a supermini? You better believe it. The engineers over at DS mated this package with a short shift six-speed manual and Torsen-sourced limited slip differential for sake of traction, road-holding and handling.

For even more agility, the suspension has been lowered by 15mm and the front and rear tracks have been widened by 26mm and 14mm respectively. The New DS 3 Performance models are also fitted with larger 323mm brake rotors at the front (with Brembo callipers), and 249mm discs at the rear. This Peugeot 208 GTi and Ford Fiesta ST rival really has the workings to take on its competition head on.

But if whizzing about town in a ball of fury isn’t really your cup of motor-oil then you’ll be pleasantly surpised to know that the DS3 duo is a customisable as an iPhone’s back-cover. With 78 various body/roof colour combinations and over three million personalisation options, the new DS 3 has plenty of personality to go around. Personalisation is now greater than ever, with ten roof decals available for the hatchback and four fabric roofs on the Cabrio, the DS is at the cutting-edge of Parisian avant-garde. 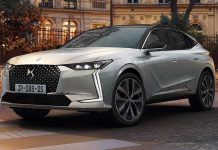