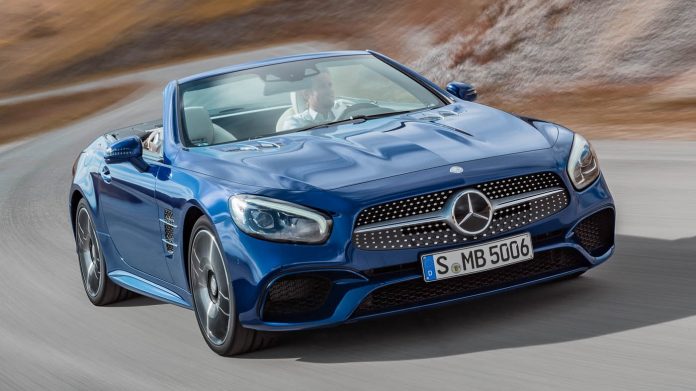 The SL has always been the flagship roadster for Mercedes-Benz, with the history that stretches back as far as the Le Mans-winning W194 racer from the 1952. Currently in its sixth incarnation, the R231 SL was originally introduced back in 2012, and now it has been given a refresh inside and outside.

The most significant change on the outside is the totally new and curvier front end. The outline of the grille has been inverted from the pre-facelift R231 SL, and it’s blinged-up by those “diamond grille” studs. The headlights take on a slimmer profile and mimics those on the Mercedes-AMG GT, and it features LED Intelligent Light System as standard.

The bonnet may look the same with the two outlet vents but they’re now complemented by a couple of powerdomes. AMG-syle front bumper with the trademark A-wing is fitted as standard, while the side skirts, rear bumper and all-red LED tail lights are new as well. A range of 19-inch wheel designs are on offer, and two new colours are introduced to the existing SL colour palette: Brilliant Blue and Designo Selenite Grey Magno.

Interior changes are limited to the new steering wheel, instrument graphics, and some redesigned buttons on the center panel, but it’s still luxuriously-equipped with a choice of interior trims and several shades of leather. Even the airbag module is wrapped in nappa leather with topstitching. Still, the party piece is the “vario-roof” folding hard top that offers both the comfort of a coupe and the wind-in-the-hair experience of an open-top roadster. It also operates while on the move at speeds up to 40 km/h.

Powering the facelifted SL is a couple of updated twin-turbo powerplants paired to a new 9G-TRONIC nine-speed automatic transmission. Horsepower and torque from the 2,996 cc V6 in the SL 400 have increased by 35 hp and 20 Nm respectively to deliver a total of 367 hp and 500 Nm. The 4,663 cc V8 in the SL 500 on the other hand develops 25 hp more at 455 hp, while its torque figures are retained at 700 Nm.

The 2015 Mercedes-Benz SL debuted at the 2015 Los Angeles Auto Show, and it will go on sale in the second quarter of 2016 for European markets.