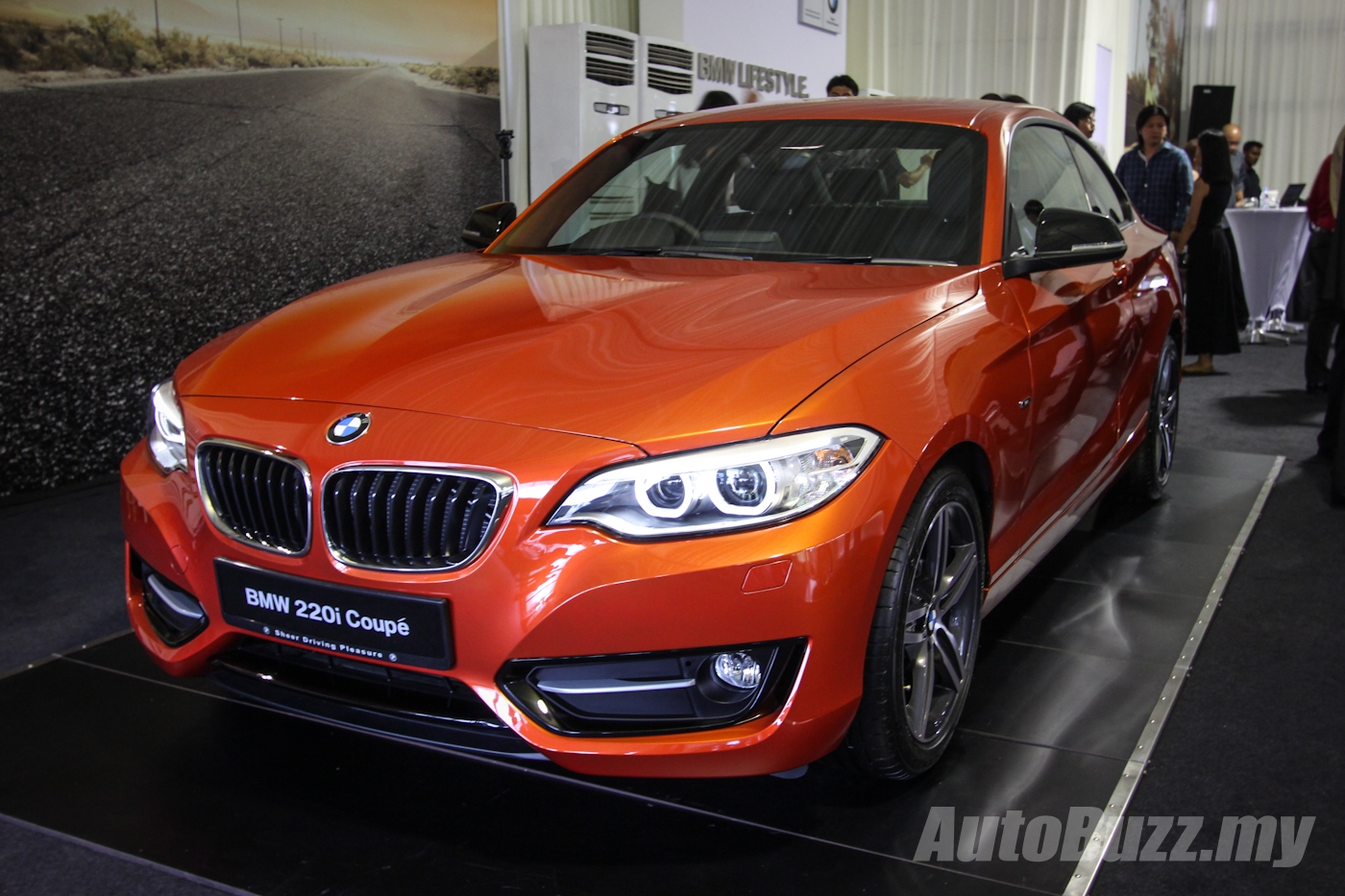 BMW Group Malaysia launched an all-new series in Malaysia, the BMW 2 Series Coupé in conjunction with the BMW Malaysian Open 2014 tennis tournament. Launched alongside it was the BMW 4 Series Convertible. The BMW 2 Series is available as the 220i Coupe model, which is strangely similar to the 320i in terms of performance. It comes dressed in BMW’s Sport Line Package for RM20,000 more.

By now, many are still confused by the new ‘numbers’ popping out from the German automaker’s production line, and how these new Series fit in the market. If you have been following closely on BMW’s development, 2-door models or the coupes from the basic line-up now have their own badge, or rather number.

The ‘confusion’ started when the BMW 4-Series was introduced, replacing the 2-door 3 Series altogether. Now, the BMW 1 Series gets a new sibling, the BMW 2 Series as its coupe model.

This all-new 2 Series bears a strong resemblance to its predecessor, after all it is derived from the 1 Series Coupé. I have to say, the looks of it is provocative, it makes you want to drive it, to understand how this feisty looking car of this size and shape handles.

It measures 4,432mm in length and 1,774mm in width, making it 72mm longer and 26mm wider than the 1 Series Coupe. Wheelbase length has also been increased by 30mm. On top of that, it gets wider tracks, with 41mm wider front and 43mm wider rear, giving it a stronger stance.

The cabin design with its classic ergonomic and driver-oriented cockpit is very familiar. The BMW 220i Coupe is fitted with sports leather steering wheel with matt Satin Silver interior trim. Whereas the BMW 220i Coupe Sport features the same steering wheel but fitted with paddle shifters, cruise control with braking function and High Gloss Black and matt Coral Red interior trim.

Headroom for front seats has been increased by 19mm while legroom for rear two passengers is increased by 21mm. Yes, only two seats at the back. The backseats has the 60:40 folding configuration for larger storage compartment.

Powering the two-door newcomer is  a 2.0-litre four-cylinder BMW TwinPower Turbo engine, that is similar to the one in the current BMW 320i F30 model. This feisty car produces 184hp with torque peaking at 270Nm. Acceleration figure, 0 to 100 km/h in 7.0 seconds with a top speed of 230km/h. It has quite an impressive average fuel consumption reading of 6.0 litres per 100km.

If the figures still doesn’t impress you, you’ll have the Launch Control function to play with. Turn off the traction control, put the ‘S’ mode on, set the brake, floor the right-most pedal, then release brake for a feel good time. Made possible by the 8-speed Sport automatic transmission.

Both BMW 2 Series and BMW 4 Series Convertible were unveiled by international tennis players from the BMW Malaysian Open 2014 event. As for now, only the BMW 220i Coupe and the BMW 220i Coupe Sport is available, priced at RM259,800 and RM279,800 respectively. BMW Group Malaysia has no plans on bringing in the more exciting monstrous M235i at the moment.