Home News Ferrari to reclaim Le Mans glory after 50 years with the 499P... 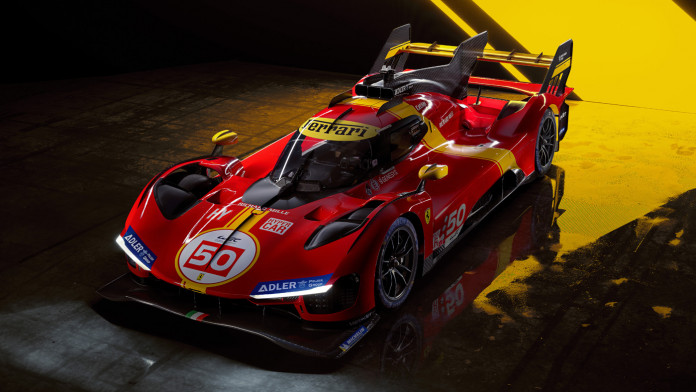 After half a decade since participating in the top class of endurance racing, Ferrari will return with the Ferrari 499P, its new Le Mans Hypercar that will tackle the FIA WEC in the elite class from 2023. Ferrari competed with the 312P 50 years ago, which was the brand’s last appearance in the premier class of world endurance racing.

Like the 312P, the 499P’s moniker hints at the displacement of each cylinder in the engine and the letter ‘P’ stands for Prototype. The livery with which the 499P will debut at the upcoming 1000 Miles of Sebring includes a version of the renowned 312P colour scheme from the 1970s to visually underscore the historical connection with Ferrari’s last works entry 50 years ago. As such, one car will bear the number 50, and another will bear the number 51.

Complying with the Le Mans Hypercar regulations, the Ferrari 499P is powered by a hybrid system. The internal combustion engine (ICE) is a 3.0-litre twin-turbo V6 that shares the architecture of the engine fitted in the 296 GT3, but has gone through a thorough overhaul by Ferrari’s engineers. The engine bears some of the car’s weight and is crucial to the physical structure of the 499P.

Situated at the front axle of the 499P is an electric motor with a 272-hp (metric) maximum output. The electric motor is part of the Energy Recovery System (ERS) that does not require external charging as the battery is recharged during deceleration and braking. Combined, the Ferrari 499P’s hybrid powertrain makes 680 hp (metric) and is paired with a seven-speed sequential gearbox.

As for styling, the Ferrari 499P was refined with the support of the Ferrari Styling Centre under the direction of Flavio Manzoni. Not just for show, the 499P’s shape allows air to pass through the side pods over the recesses between the main ridges surrounding the cockpit, cooling the radiators concealed beneath the bodywork. The large louvres behind the wheel arches reduce the pressure inside the wheel housings.

At the rear, a subtle carbon-fibre skin covers the various functions, leaving the wheels and suspension completely visible. The tail is characterised by a double horizontal wing; the main wing and upper flaps have been meticulously designed to guarantee the necessary downforce and achieve maximum performance.

Technology highlights on the Ferrari 499P include an all-new carbon-fibre monocoque chassis, a push rod-type suspension, and a brake-by-wire system. The brake-by-wire system allows the recovery of kinetic energy by the front electric axle under braking.

The Ferrari 499P will be managed on track by Maranello technicians and engineers with the collaboration of AF Corse. The partnership continues the winning streak, which began in the 2006 FIA GT with the F430 GT2 that secured Team, Driver and Constructor titles in its debut season. The vast majority of GT successes in recent years have been the result of the partnership between Ferrari and AF Corse, including all those achieved in the World Endurance Championship (WEC) since its inception in 2012.