With the 2021 Formula 1 season scheduled to start its first race in March, Aston Martin has begun its return to the top-flight of motorsports through online communications.

After a 60-year absence, the Aston Martin Formula One Team will make its race return at the opening round of the 2021 season in Melbourne, Australia.

The Formula One team is not newly formed, however, as it used to be called Racing Point F1 Team, which featured eye-catching pink liveries. The Silverstone-based team is owned by Lawrence Stroll, whose consortium bought 16.7% stake in Aston Martin Lagonda almost 12 months ago.

As such, all online communications formerly produced by the Racing Point team now carry the Aston Martin Formula One Team name.

Lawrence Stroll, Aston Martin Lagonda Executive Chairman said: “Formula 1 is a hugely powerful platform that will play a key part in the overall Aston Martin strategy as we seek to take the company forward.”

“This is a brand that has already had huge success in top-level international motorsport such as the 24 Hours of Le Mans – and now we have an opportunity to write a new page in the history books. That’s a hugely exciting prospect for anyone who is a lover of the Aston Martin brand, for fans of Formula 1 and the sport itself,” added Mr Stroll.

The confirmed driver-pairing is headlined by newly recruited four-time world champion Sebastian Vettel and multiple podium-finisher Lance Stroll. In February, Aston Martin Formula One Team will reveal its livery and car which continues to use Mercedes-AMG power units.

The last F1 race that Aston Martin participated was back in August 1960, with the DBR5. 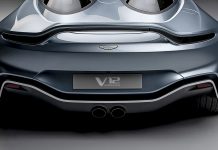 Video: We recently “bought” an Aston Martin DBX…here’s how we customised it!