Home News Kode 0 by Ken Okuyama, the man who designed the iconic Ferrari... 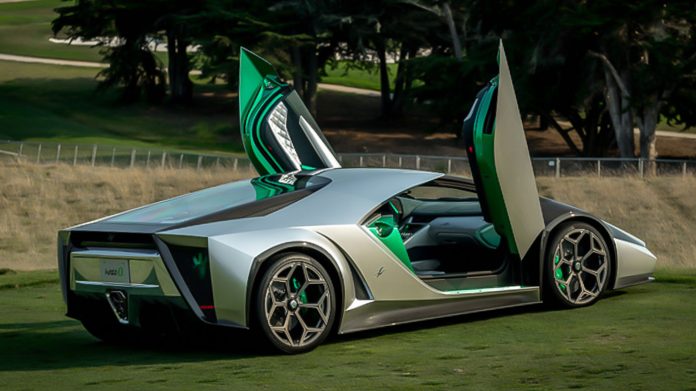 Ken Okuyama, the man behind the iconic Ferrari Enzo’s design has just revealed his latest project, a one-off modern-day supercar unlike anything else. Unveiled at the 2017 The Quail – A Motorsports Gathering at Pebble Beach, California, the Kode 0 (Zero) takes a Lamborghini Aventador as base and gets a unique design penned by Okuyama himself.

The Kode 0 came into existence when Okuyama dreamt of reviving the supercar styling of the early 1970’s using modern-day technologies. Thus, the Kode 0 features a wedge-shaped design incorporating a no-frills, back-to-basic look with clean body lines, similar to the dream cars of the little kids from that era.

The car’s silhouette, identified by a low-slung front end and a sharp dipping roofline, are Okuyama’s efforts to give the Kode 0 superior aerodynamics while giving it a distinct profile from its donor car. The rear end of the car is perhaps the most radical profile with large rear corner mesh and visible green-painted fans. Okuyama also added a triangle-shaped, quadruple exhaust pipe combination that hints at the Kode series DNA.

Okuyama has turned to Novitec for their NOVITEC NL3 forged alloy wheels measuring at 20-inch in the front and 21-inch at the rear. The brake callipers are painted in the company’s signature metallic green.

Every single panel on the Kode 0 is made of carbon fibre and manufactured at Ken Okuyama Cars’ factory in Yamagata, Japan. Assembly of the supercar was done by hand with the highest precision and quality-controlled methods.

Stepping into the cabin and one will find all the Lamborghini branded items replaced by Ken Okuyama’s signature. The signature green metallic hue is also extended into the cabin with generous use of Alcantara and leather for the upholstery.

No changes were made to the 6.5-litre naturally-aspirated V12 found in the original Lamborghini Aventador, pushing out 700 hp and 690 Nm of torque. Drive is sent to the rear wheels via a seven-speed single-clutch ISR gearbox.