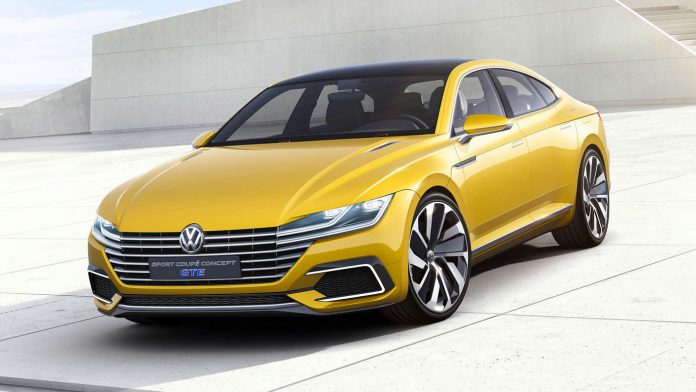 The Volkswagen CC as we know it has just been discontinued. In its place is a new four-door premium coupe called the Volkswagen Arteon, and it is entirely new from the ground up.

The Atreon is a portmanteau of words ‘art’ and ‘eon‘; the latter meaning “an indefinite and very long period of time”. The Arteon, which sits above the Passat, is set to compete directly with the BMW 4-Series and Audi A5 Sportback.

The teaser image will introduce a new ‘horizontally accentuated’ design from Volkswagen. It has a large grille merged with three-dimensional LED headlights. It receives frameless windows and the top-hinged tailgate opens up to a cavernous boot.

As always with teasers, no technical data has been revealed. However, we could see Volkswagen to debut its autonomous technology, together with a petrol-electric hybrid powertrain.

The new four-door coupe could take hints from the Sport Coupe Concept GTE  (pictured above) unveiled at last year’s Geneva motor show. Also, don’t be surprised if the Arteon shares several design touches from the newly launched Passat B8.

Previously, the VW CC was sold in Malaysia with a base price tag of RM226k. Its successor, the Arteon, will hit showroom floors sometime in 2017 after making its world debut at the 2017 Geneva Motor Show scheduled for March.