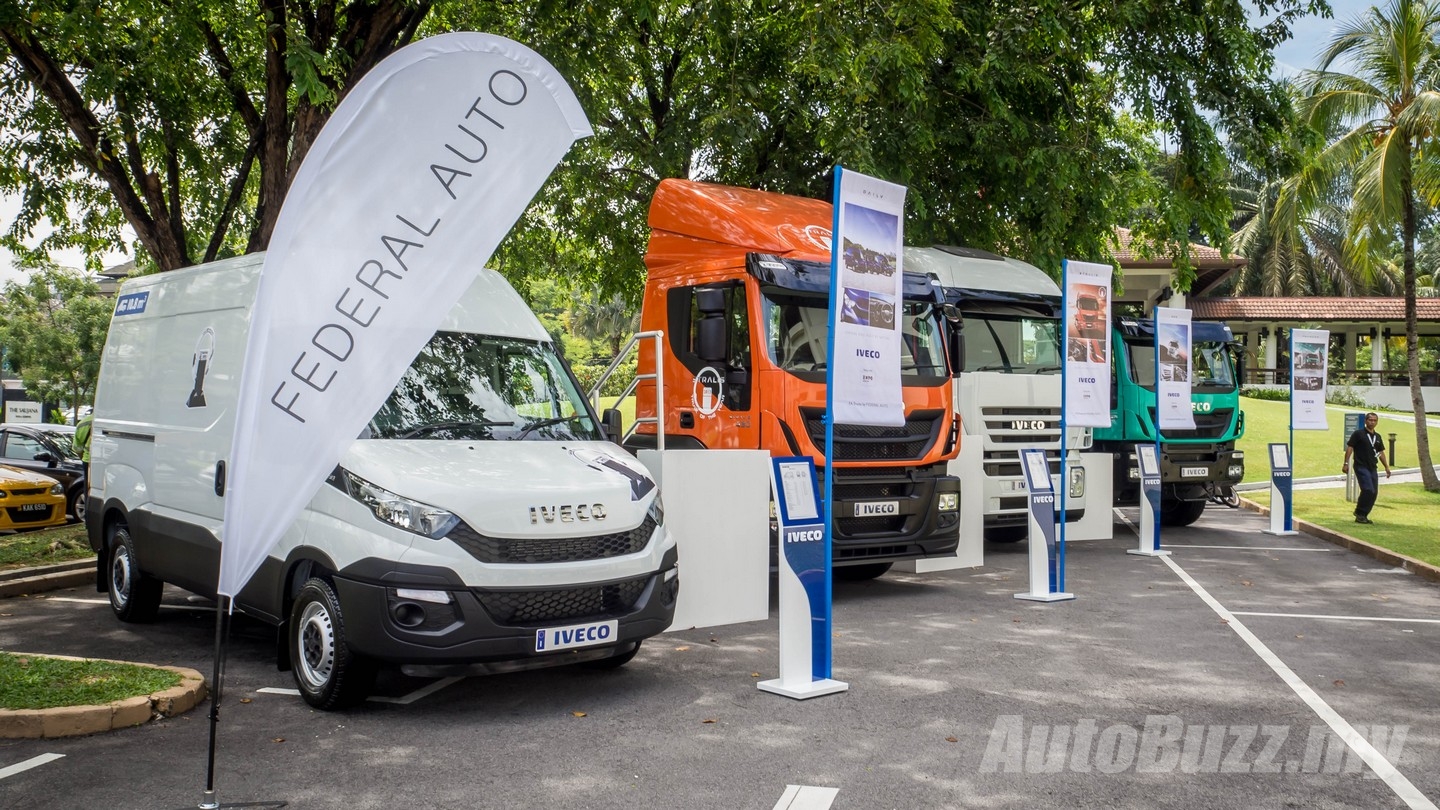 Iveco, short for Industrial Vehicles Corporation is an industrial vehicle manufacturing company based in Turin, Italy, and produces a range of light, medium and heavy commercial vehicles. This includes quarry or construction site trucks, buses and some special vehicles for firefighting use, off-road, military and civil defence. You may have seen some Ivecos running around town, and that’s because the Ministry of Health has a total of 400 Iveco ambulances that are still actively running about.

The company is helmed by CNH Industrial Group and is no stranger to Thailand’s commercial vehicle industry. They are however, officially back in Malaysia and formed a partnership with Federal Auto Holdings Berhad (F.A Trucks), their official and exclusive distributor.

Five key products have been introduced by the duo, and they are: Daily light commercial vehicle and 2015 International Van of the Year, Trakker off-road truck, Eurocargo medium truck, 682 lorry and last but not least, their 2013 Truck of the Year, the Stralis. The five commercial vehicles are offered in a combined total of 14 variants, with more models slated for market introduction later in the year. One key prospect would be buses.

Iveco’s New Daily van is expected to be the brand’s best seller here, and is offered in three guises – panel van, window van and chassis cab. The 2015 International Van of the Year has a gross vehicle weight (GVW) of 3.5 tonnes, whereas the Chassis cab model (shorter wheelbase) has a GVW of 5 tonnes. They are both powered by Iveco’s 3.0-litre F1C turbodiesel engine that makes 146 hp at 3,500 rpm and 350 Nm of torque at 1,500 rpm. This rear wheel drive van gets a six-speed manual transmission and has a load volume of 10.8 cubic metres. Pricing for the Daily starts from RM106,700.

Next, we’ve got the 682 heavy-duty truck. Customers can choose to have either the on-road or off-road models, and both can be had in two trims, making for a total of four. The on-road version can be had in a 4×2 (gross commercial weight of 43 tonnes) or the 6×4 (GCW 60 tonnes) axle configurations, whereas the off-road truck is available in a 6×4 (GVW 33 tonnes) or the 8×4 (GVW 41 tonnes).

One step up in terms of price bracket is the Eurocargo medium truck, which starts from RM280,000. The Eurocargo lineup is the most extensive with regards to its offering, and with eight variants to choose from, as Iveco puts it, there’s surely a Eurocargo cut out for every job out there. The variants are differentiated by its Gross Vehicle Weight, from 9 to 18 tonnes.

Powering the Eurocargo is a sole Tector 6 engine. That’s the Euro3 compliant 5.9-litre inline-six diesel but with four power outputs from 180 hp to 280 hp. Torque figures range from 570 Nm to 930 Nm. Transmission choices range from a six-speed or nine-speed ZF manual gearbox, or a five-speed Allison automatic torque converter (for the 18-tonne only).

One-up again in terms of price bracket is the Stralis, a heavy commercial vehicle that was crowned the 2013 Truck of the Year. The on-road truck carries a starting price of RM342,000, and has a GCW of up to 44 tonnes, depending on the variant of your choice. Three variants are available here, differentiated also by its axle configuration; 4×2, 6×2 and 6×4.

The Stralis is primarily designed for long distance heavy haulage, so for those in the industry, this may just be your pick of the lot. Available only with Iveco’s Euro3 compliant Cursor 10 engine, the oil burning motor displaces 10.3-litres with six-inline cylinders. It makes 430 hp and 1,900 Nm of torque, and transmission choice is the single 12-speed automatic.

Lastly, we have the Trakker; Iveco’s high performance and robust truck that’s designed to operate in extreme off-road conditions such as construction or mining industries. It has proven its reliability at Dakar and has a starting price of RM408,500. As of now, only the 6×4 tractor model is being offered, and it has a GCW of up to 60 tonnes.

In charge of all the tugging is the Cursor 13 motor, a 12.8-litre inline-six diesel engine that is good for 420 hp and 1,900 Nm of torque. It’s also a Euro3 engine, and transmission choices range from a 16-speed ZF Ecosplit manual transmission with servo-shift system or the Eurotronic automatic transmission.

During the launch, Iveco’s regional brand leader Mr Michele Lombardi said, “Malaysia is an important market with a dynamic automotive sector. We are entering this competitive market with a full line of 14 models, and together with Federal Auto we are confident that discerning fleet and transport operators and business owners in Malaysia will appreciate the proven quality, durability, reliability and most importantly, the cost-efficiency of Iveco products.”