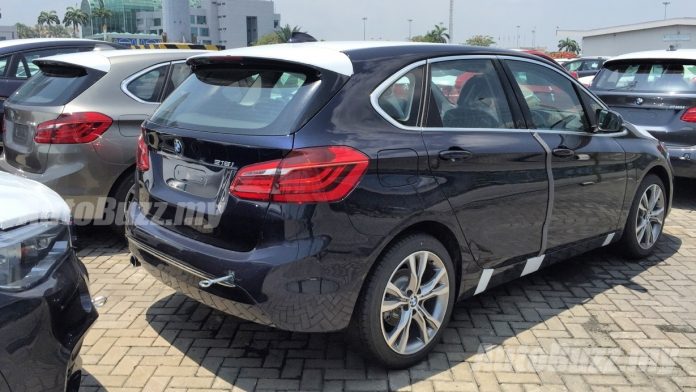 Soon to join BMW’s sole 220i Coupe variant in the model’s lineup is the BMW F45 2-Series Active Tourer, which also happens to be the Munich carmaker’s first ever front-wheel drive vehicle. These spy shots were taken (courtesy of our friend and reader Fung) at West Port, Port Klang, and is a clear signal that the variant’s local debut will take place sometime soon. Which will be at the upcoming BMW World Malaysia event that’s taking place next week (17 to 19 April) at Bukit Kiara Equestrian & Country Resort.

A closer look at the pictures shows us that we can expect at least two variants, but they both seem to bear the same 218i badge, so the difference may just be in the kit list as opposed to mechanical. The new FWD layout is not the only new thing here, because powering the engine is also BMW’s first 1.5L three-cylinder turbo engine – one that’s shared with the MINI Cooper 1.5L. Not surprising because the 2-Series Active Tourer also sits on the same UKL1 platform underpinning the MINI.

Here we have image gallery of the Thailand 2-Series Active Tourer, taken at the recent 2015 Bangkok International Motor Show.

BMW expects 75 percent of the F45 Active Tourer owners will be new to the brand, so it’s a telltale sign that they are targeting a new pool of customers. It’s unclear as yet whether the 1-Series LCI will be introduced at the event next week, but it’s about time the outgoing 1-Series gets refreshed. Also in the grey is the seven-seater 2-Series GT – BMW’s answer to Mercedes’ B-Class MPV. Only time will tell, so keep watching this space for the latest updates!