The eagerly-awaited BMW M brothers have now arrived on our shores. BMW Group Malaysia officialy announced the introduction of the F80 M3 Sedan an F82 M4 Coupe to the local lineup simultaneously, retailing at RM738,800 and RM748,800 respectively. With the new naming convention the M3 Coupe becomes the M4, so the M3 badge will only grace the sedan bootlid from now on.

With the long motorsports history attached to the brand and the car itself, the new M3 Sedan and M4 Coupe should again represent the sportiest model from the 3-Series and 4-Series range without sacrificing the comfort and practicality.

EXTERIOR
The wide and lowered stance of both cars show their sporting intention even when standing still. The powerdome on the lightweight aluminium bonnet not only adds to the effect but also hint about the serious powerplant that resides under it. Both the M3 Sedan and the M4 Coupe were designed with special M details such as the double-bar inserts in the kidney grille and unique 19-inch M double-spoke wheels.

The M3 Sedan and the M4 Coupe share similar front-end designed for optimum airflow with the inclusion of Air Breathers and Air Curtains. The M gills on the front fenders are actually a functional design element to improve the airflow around the front wheel arches. Even the wing mirrors have been aerodynamically redesigned for better airflow.

The Carbon Fibre-Reinforced Plastic (CFRP) roof sheds 5kg on the M3 Sedan and more than 6kg on the M4 Coupe. CFRP is also used for the boot but only on the M4 Coupe while the M3 Sedan gets a subtle lip spoiler. Down below, four polished tailpipes poke out underneath the integrated diffuser on the rear bumper. Flaps in the exhaust system can also alter the sound from the pipe, based on which mode is selected from the Driving Experience Control.

INTERIOR
The M sports steering wheel with shift paddles comes as standard with additional M design touches to distinguish them against the non-M cars. This include the M-design instrument panel, M door sills, M driver’s footrest, M gearshift lever, and sculpted front bucket seats. The bucket seats also have M emblems that that light up upon entering the car.

M display has been added to the full-colour Head-Up Display that projects vital information including rev counter and gear display on the windscreen. M3 and M4 are equipped with the latest iDrive Touch Controller along with Navigation System Professional which features a 3D map display.

There’s also a newly developed BMW M Laptimer app that records the car’s acceleration, braking points, and G-forces along with lap times for drivers to analyse their drive. The app, installed on a smartphone can be controlled using the iDrive Controller once connected via USB cable or the car’s snap-in adapter.

Using a seven-speed M Double Clutch Transmission gearbox, the M3 Sedan and the M4 Coupe accelerate from 0 – 100 km/h in 4.1 seconds and will max out at 250 km/h. The gearbox features Launch Control, and drift-friendly Stability Clutch Control function that stabilise the car by opening the clutch when it detects oversteer, and the Smokey Burnout function that allows the rear wheel to slip just enough while the vehicle is moving. The shift characteristics can also be specified from the Drivelogic modes ranging from comfort to sporty.

In the handling department is taken care by the M Servotronic electromechanical steering system, Adaptive M suspension with adjustable damper settings, and Active M Differential that works together with the Dynamic Stability Control (DSC) system with M Dynamic Mode.

WHAT ELSE?
Both cars can be had in Alpine White or Sakhir Orange with Leather Merino Black interior but Yas Marina Blue is M3 Sedan-only exclusive with optional Leather Merino Silverstone interior. Additional two colours available on the M4 Coupe, Mineral Grey or Austin Yellow with Leather Merino Sakhir Orange interior. Like any other BMW models, the on-the-road price of RM738,800 for the M3 Sedan and RM748,800 for the M4 Coupe comes with BMW Service + Repair Inclusive (BS +RI). 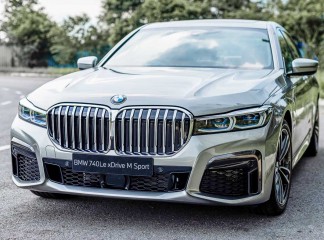