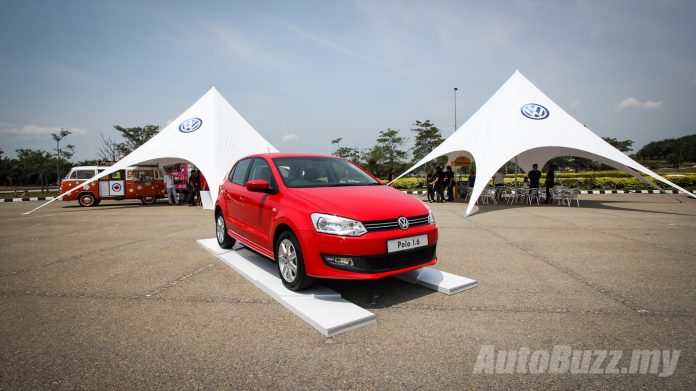 We woke up early this morning to brave through the morning rush hour, expecting a fleet of super… minis at the Central Piazza Oasis in Ara Damansara. We gather here with other auto journalists for the new Polo 1.6 media test drive event. The new Volkswagen Polo 1.6 was launched less than a month ago, today Volkswagen Group Malaysia invited us to experience the latest addition to the Polo line-up.

I would like to stress again that the locally assembled model has a different engine and gearbox. The third CKD model to roll out from the Pekan, Pahang plant after the Passat and Polo Sedan, gets a ‘downgrade’ to a non-TSI engine and a non DSG gearbox; a 1.6-liter MPI (Multi Point Injection) engine with a 6-speed automatic gearbox with Tiptronic. An effort from both Volkswagen Group Malaysia and DRB-Hicom to offer Malaysians a cheaper alternative to German engineered cars.

As expected, we were greeted by a fleet of the new Polo 1.6, all 18 of them, staring at us, waiting to fulfill its ‘big on fun’ promise. After a quick video and photo shoot, we headed on to Brasserie Enfin for a quick breakfast, followed by event briefing. We were informed earlier that we will be taking the Polo 1.6 from Ara Damansara all the way to Sepang.. not-the International Circuit, but Sepang Car Park & Off Road. What, off road? In a Polo? That’s going to be interesting.

We were welcomed by the Director of Marketing & Communication, Ms. Petra Schreiber and the event briefing began soon after. It turned out that the drive to Sepang will not be a breeze as the entire media test drive event was in fact a competition. Each VW Polo 1.6 will have a team made up of two media representatives. First up, the fuel economy drive. Each team is will need to achieve a minimum set fuel consumption figure at 6.3L/100km, and we must arrive at the finishing line in one hour and forty minutes. So, which should we sacrifice, time or fuel?

A set of rules then came into play such as the air conditioner must be set only at 21 degree Celsius, no coasting on Neutral gear, no folding side mirrors, we are not allowed to use cruise control, we must follow set speed limits, and we were reminded not to open the doors and scoop along using our feet. Immediately after group photo session, we went straight on to our cars.

Standing next to Car 10 with a big smile was our team mate Amirul from Auto Insider. To ensure we don’t cheat, a marshal from VW was with us for the journey. We had four adults in our car, me, Amirul, Alif the marshal and Eddie the videographer. This will definitely affect our fuel consumption results as most of the other cars had only three in a car. Accidentally messed up the GPS settings wasn’t helping too.

I was the first to take the wheel. We were going on an average of 60km/h. But it’s ok, we did it for the name of science. Our first check point was PICC at Putrajaya for mandatory driver change. As we were crawling to the check point, all the Polo 1.6 drivers took all the road batterings. Lorries were blaring their honks at us and cars overtaking us stared with much hate. It’s funny and at the same time really ‘you-need-to-get-out-of-my-way’ stressful to see 18 slow-moving and road hogging cars in the morning, all at the same time.

Fuel consumption figure shown on the multi-function display was great, averaging at about 5.8-liter/100km. After Amirul took over at PICC, we went straight to Sepang, through narrow Sepang trunk roads. As Amirul was having a great time trying his best to not brake, I took out my smartphone and started pairing it with the car via Bluetooth. It was a requirement in the test. I have to admit, it did take me a while to accomplish it. After living with full-coloured-HD screens on ‘canggih’ gadgets for years, I needed time to adapt to the colorless world. The display on the head unit was monotone. I’m sure you would too. Make it. But after some time.

Amirul did a great job by bringing down the average fuel consumption to 5.7-liter/100km. However, it was in exchange with time. We were running late. The GPS we showed 3 minutes to destination, but the clock on Alif the marshal’s iPad was counting down to 1 hr 40 min in 5 seconds. We failed to arrive on time. Minutes later, we arrived at ‘Sepang Car Park’.

Test courses were laid out around the car park area and we were told to quickly report ourselves at one of the nicely built white tents for activity briefing. Volkswagen had prepare four different tests that would bring out the colours of the new Polo 1.6. All eighteen cars were grouped into four, each group taking turns to complete the tests.

First up for us was ‘Zippy Fun’, Gymkhana style autocross. Race though slalom, lane change, sharp turn and return via the same route to get the best time. Easy but not fast enough. Then it was ‘Steady Fun’, VW claimed they made a German engineered G-force indicator. A sophisticated looking transparent acrylic ‘wok’ that was fitted on the hood of a black Polo 1.6, with a tennis ball in it. We had to drive through a quick course and make sure the G-force indicator ball doesn’t fall out of the wok. Not as simple as you think when you are required to achieve the fastest lap time.

Next, ‘Tricky Fun & Parking Fun’. Tricky Fun was a chance for us to learn J-turn side parking. Sliding and throwing the Polo 1.6 into a cone made side parking was great fun. Parking Fun wasn’t. I needed to do a side parking, which I reckon something that I can do quite brilliantly. However, I was blind folded. Amirul was in charged to give instruction from the outside, to help me to achieve the impossible. Guess what, it was really, impossible. We failed. Badly. We took more than 5 minutes, and hardly in the parking space. Memalukan.

Last was the ‘Gravel Fun’. We were taken for a high speed rallying ride in a VW Polo WRC, lookalike. A heart rate monitor was strapped on our wrist to measure changes in our pulse rate as we go through the dirt track driven by VW marshal. It was fun and scary. Mainly scary. However, the fear was overcome by amazement of how well the stock Polo 1.6 with WRC decals tackled gravel and dirt so well.

Hats off to Volkswagen Group Malaysia for the effort put in to organize such a well planned and well thought of event for us all, to experience the new hatchback. The open highway on the way back to Oasis Ara Damansara did as good in showing us the true colours of the new Polo 1.6, even though we almost got into a road side photo shoot. When we arrived, the multi-function display showed “9.3-liter/100km.” Whoops!

The new Polo 1.6 may be ‘downgraded’ to a non-TSI and non-DSG setups, the German engineering DNA still remains in this hatchback. It is one nimble little car that will surprise you. You may not get the turbo sprint, but the power does come in a bit especially in ‘S’ mode. Better late than never right? Wait, does that make any sense?

Let me tell you something that may surprise you, this little car does fart like its DSG brothers. We were like ‘aww, he farts like its elder brothers’.. A very faint one. And guess what, we have also learnt that, there’s a new CKD member coming real soon. Curious?

Do stick around with us as we bring you the full review of the new Volkswagen Polo 1.6, when can get hold of one. For now, enjoy the images taken at the event. We are currently working on the video footage taken ‘professionally’ by AutoBuzz.my team. A video highlights of the event coverage will be published real soon!

[UPDATED]
Here’s the video we made on the event coverage. Enjoy the video, do give us a thumbs up and don’t forget to subscribe to our YouTube channel.