Home News KLIMS18: We are so amused by how “fresh” the Citroen C3 Aircross... 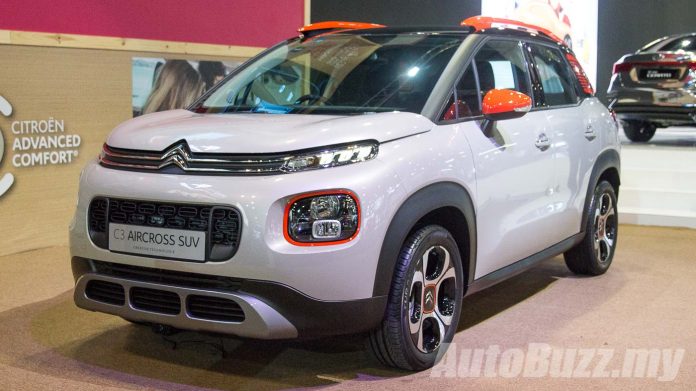 If there was ever a car manufacturer who’s capable of designing cars that look the way the C3 Aircross does, it had to be Citroen.

Previewed here at the 2018 Kuala Lumpur International Motor Show, the Citroen C3 Aircross is expected to be launched sometime early next year, priced in the ballpark of RM 120-130k (estimated).

The old, the young, the cool or the fashion-ignorant – you can’t believe the crowd and the kind of attention the C3 Aircross drew and looking at the pictures, would you actually be surprised?

At the front, you get a split headlamp design that’s reminiscent of the new Triton while along the side, those wheels (named “4ever”) are possibly the most unique in the business. That’s even before you reach the back, where the 3D-effect tail lights take centre stage.

Inside, the most standout features have to be those seats, those air-con vents and the “drive display” – with the P, N, R and D displayed by the cupholders in front of the gear lever. No one designs cars like Citroen, no one.

Meant to go head to head with the Renault Captur and the Peugeot 2008 that GC Mah reviewed, the Citroen C3 Aircross is motivated by 110 hp and 205 Nm from a 1.2-litre PureTech turbocharged 3-cylinder engine, like the one you’d fine in the Peugeot 208 and 2008, paired to a 6-speed automatic transmission.

0 to 100 km/h takes 10.4 seconds, if that ever matters to you in a car like this. What would matter though, are the six airbags it’s equipped with, along with Lane Departure Warning, Driver Attention Alert, ABS and EBD, stability control, and brake assist.