The 2013 Achillies Formula Drift Asia (FDA) round in Malaysia will be remembered when defending FDA champion, Daigo Saito, has succumbed to defeat, which means a new winner was crowned. Thai drift ace, Chanatpon Keropiam, fondly known as S Westlake, has won the Malaysian round, defeating Australia’s Tom Monkhouse, aka Turbo Tom, who is also leading the driver’s standings.

A healthy display of 33 drivers from Australia, Japan, New Zealand, Indonesia, Thailand, Singapore and Malaysia competed in Malaysia’s drifting circuit of Speed City KL. The new format saws qualifying and Tsuicho battles were held on a single day. On qualifying, Daigo “The Ninja” Saito emerged on top and only Tengku Djan and Ser Ming Hui/Ah Fai, were bearing the Malaysian flags to the delight of local fans. On the first round of the top 16, Daigo Saito, the winner of 8 rounds of FD Asia, made an rare error in which he went overaggressive and spurn off, allowing nearest competitor Turbo Tom to escape with victory.

The unstoppable Ninja was stoppable after all, the biggest shocker of the entire event

Then it was a bittersweet moment for Malaysia fans when two of their top 16 qualifiers, Djan and Ah Fai, battled to determine who will be the sole Malaysian to progress further. It was Djan’s familiarity with his new machine, nicknamed “700SX” and Ah Fai’s struggles with his machine which leads to Djan bearing the single Malaysian flag to the next round. Another favorite, the dashing handsome Fredric Aasbo of Norway; ended his challenge on top 16 after this RS-R 86 suffered from mechanical gremlins.

As rain hits Speed City, which resulted to slippery surfaces that has resulted to more seasoned drifters spurning off and only the skillful few made it. The top 4 emerged with Djan, Gushi, Turbo Tom and S Westlake completed the top four. Djan, who has not in competitive drifting for quite some time and was attempting to clinch the Malaysian round, charged too aggressive on his opponent, caused him to spurn off, giving the victory to the Australian. Meanwhile on the other semi final clash,it was the battle of wits between Gushi and S Westlake but the amazing Thai driver prevailed and progressed to the final.

On the battle for third place, the local fans were devastated to see their local hero Djan outperformed by Gushi in a fair and square battle. It was a fierce final battle between S Westlake and Turbo Tom, where a small and nimble green Nissan is battling the big sized but overpowered Toyota from the Australian. But it was the green machine that won the hearts of all three judges, allowing S Westlake to win the round. Ironically the final battle was made for those who qualified on the bottom two on the top 16 qualifiers. The next and final round of FDA will be in Indonesia on November where the driver’s title is held wide open.

The final battle between the best drifting talents from Thailand and Australia is worth the admission to FDA Mysia!

More pictures will be seen on the future posts, and our special appreciation to our master photographers Eric Lim and Woay Chee for their services on providing beautiful drifting photography. 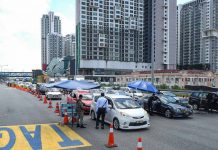